Due to the Fast of the Tenth Month (10 b'Teveth) occurring on December 23 this year, those who observe the holiday of Festivus are required to postpose the Festivus Se'udah until 25 minutes after sunset. The traditional Festivus foods include [kosher] Paella, accompanied by a "big salad."

If Paella and a "big salad" are not available, then any favorite foods of the guests will suffice.  Take out is also permissible 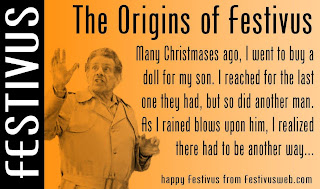 
"I've got issues with you, and you're ALL gonna hear about it!"

There are conflicting opinions regarding the beginning of the Feats Of Strength.  Some suggest that they should begin during the Se'udah.  Others suggest that doing so would be a sakkanah (danger) of vomiting.  Others say that one is require to eat his food slowly for this reason.  Still others suggest that potential vomiting is acceptable, but only when combined with the Airing Of Grievances.

The Festivus Pole, of course, should already have been erected.  However, if not, most authorities hold that one may erect ones pole before sunset.

Traditional donations to the Human Fund may be performed before sunset.  However, they must be done with the proper kewanna (intention), or else one is not yotzei midei hovato (satisfied his obligation).

It's Festivus for the rest of us!