Can a Rabbi Get Fired for Criticizing the State of Israel?

I have previously criticized the infusion of Hellenist democracy, or in Israeli's case deMOCKracy, into the Rabbinate, as one of the various strategies employed to chip away at the Torah.

The following is a report on yet another way in which the deMOCKratic State of Israel is attempting to chip away at the authority of the Torah,...and WE have been allowing it!


Life In Israel: Proposed Law: Firing a city rabbi
Yesterday the Knesset passed the first reading of a law that will allow a city rabbi to be fired.

According to the law, if it should pass into law, will allow the Minister of Religious Affairs to fire a city rabbi if he is not performing his duties and responsibilities properly. The firing would have to go through a committee that will be made up of dayan appointed by the Minister, a city rabbi appointed by the head of the Rabbanut Religious Council, a legal adviser of a government ministry. If the committee will investigate and deem the suspicions valid, they will be able to recommend to the Minister to fire the suspected rabbi.

Deputy Minister of Religious Affairs Rabbi Eli Ben-Dahan says this is necessary because there are such rabbis in the system but the system has no ways or tools to deal with them. This law will increase the level of trust the public has in the rabbis. Ben-Dahan also said this law was prepared in coordination with Chief Rabbi Dovid Lau.

The Haredi parties do not like the law proposal. They don't like the possibility that a rabbi will be fired by a politician. MK Uri Maklev asked if judges have a similar system by which they can be fired. MK Yitzchak Cohen compared Habayit Hayehudi to Titus who destroyed the Beis Hamikdash. MK Aliza Lavie is dissatisfied for another reason - the committee is made up of men and they will protect other members of the club. Lavie wants the committee to include women.

Ben-Dahan responded to the Haredi MKs saying that during the rule of Shas, there was a decrease in rabbis, while he, Ben-Dahan, has appointed 69 new rabbis, to date. As well, Ben-Dahan asked them why they are concerned to protect and defend rabbis who don't fulfill their responsibilities but continue to take payment.

Esser Agaroth (2¢):
At first I just thought this was another chipping away at the Torah, in favor of Hellenist, Erev Rav-controlled deMOCKracy.

Of course, I still do. In fact, I believe it to be a major attack on an already ransacked and unrecognizable "Torah style" of the State of Israel. We all know what "kosher style" means,...not in the least bit kosher. So, you should easily be able to determine exactly what I mean by "Torah style."

However, I also believe that this law contains the additional intention of increasing the "divide and conquer" as is suggested by the paragraph I have highlighted above. Or in the case of the Israeli Government, "keep divided and keep conquered."

Ben-Dahan apparently thinks that more is automatically better. In reality, though, this is just a continuation in the same ol' Religious Zionist vs. Haredi, "us vs. them" power struggle.

What Ben-Dahan appears to fail to realize is that the real "them" in the "us vs. them" is the Erev Rav controlled government. The "us" should be those who stand by the Holy One, Blessed Be He, and His Holy Torah. That is, those who stand by the authority of the Torah, even in the face of Israeli laws which contradict it.

Rabbis, such as Rabbi Shmu'el Eliyahu of Tzfath, have been called "extremist," and demonized for this not only recognize the authority of The Almighty's Torah, but dare to declare this fact publicly, and encourage support for it. Rabbi Eliyahu's critics have not only included Justice Minister Tzippy Livni, as one would expect, but also Mamlakhtim (diehard, religious State loyalists), and the ever "nosing into Israeli affairs from the diaspora" Rabbinical Council of America [RCA].

Apparently, someone forgot to tell the RCA that...

אין תורה כתורת ארץ ישראל - בראשית רבא.
There is no Torah like the Torah of the Land of Israel. - Bereishith Raba

Will Rabbi Shmu'el Eliyahu be the first to fired by a government committee, for not "not performing his duties and responsibilities properly?" Apparently, this clause was authored by the Supreme Council of Vagueness.

Or, perhaps, "they" will go after Ashkenazy Chief Rabbi Dovid Lau for daring to suggest that aliyah, immigration to Israel, be reserved for only those who are permitted to do so, according to the Torah,...Jews, according to the Torah definition of Jews, which flies in the face of the Israeli "Law of Return," which currently allows all those with at least one Jewish grandparent to immigrate.
(Tip: The Torah Revolution) 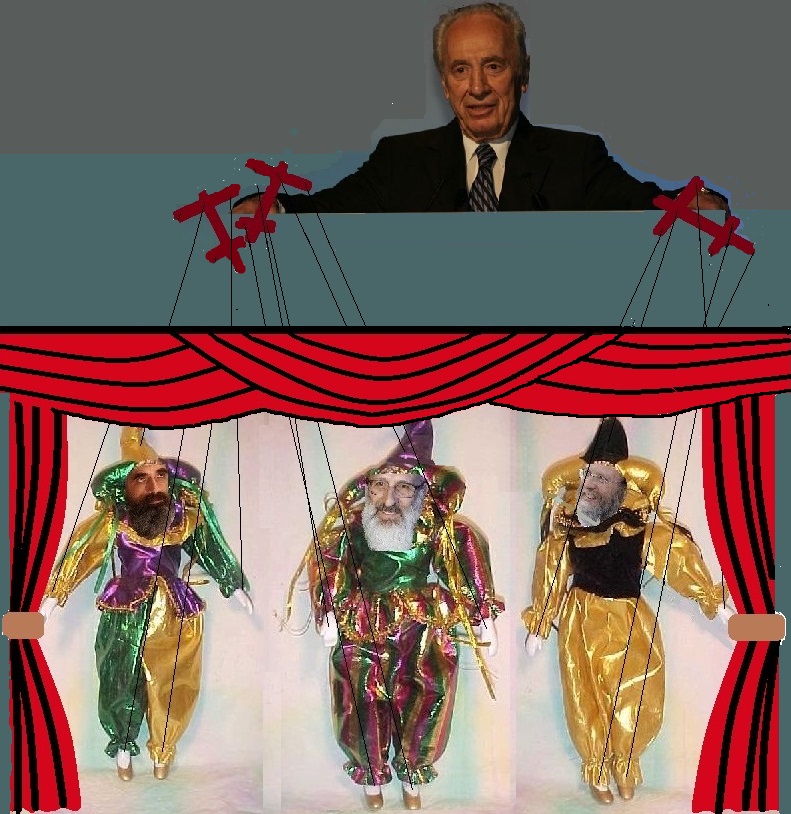 Surely, the only rabbis the Erev Rav controlled government is willing to tolerate are those rabbis not only willing to tow the government line, but those who actually delusional enough to believe in it.

For now, that is.

Stay tuned!
Posted by Esser Agaroth at 11:33 AM