French Jews, It's Getting Worse.


BREAKING NEWS – At least 84 people were killed and several others were seriously injured Thursday when a suspected terrorist drove a large truck into a crowd that had gathered for a Bastille Day fireworks display in the southern French city of Nice.

There was no immediate claim of responsibility, but two sources, including a U.S. counterterrorism source who collects and monitors jihadist social media, told Fox News that accounts linked to ISIS were “celebratory” and their followers were told to use the hashtag “Nice.” (cont.)

Esser Agaroth (2¢):
Seriously? Celebratory accounts? Where the heck have these "counter-terrorism sources" been? With their heads in a whole in the ground?

ALL Arab terrorist organizations celebrate, anytime a step is taken toward world domination. Don't worry. The Wahabis and Shi'ites will work out their own conflicts later, assuming that they can hold it in that long.

Of course, the alternative is that these "sources" are not the complete dolts they come off as, and know a heck of a lot more than they let on.

Whenever Palestinian Pseudostinian Arabs celebrate attacks on The West, only bits and pieces of reports filter through the Western news media, and are soon forgotten, while in Arabic, which The West apparently still cannot seem to figure out as well as anyone on Facebook using Google Translator, terrorist groups, their fans, and their "celebratory" accounts are abound.

Here is an interactive map of terrorist attacks in Europe by Graphiq. Pass your mouse over the marked areas to see the details of each attack.


Slowly, the French seem to be getting it, albeit too little, too late. It has even been circulating that nationalist Marine Le Pen becoming the next president is not as farfetched as people used to think.

But, French Jews? Well, aliyah (Jewish immigration to Israel) has increased dramatically in recent years, Baruch HaShem. However, those listening to the Chief Rabbi of France, as well as those stuck in the delusions and multiculturalism of the Reform Movement. And, just to be clear, that is non-Jewish multiculturalism. If it was Jewish multiculturalism, I might even be one of its cheerleaders.

Those with parents and grandparents from North Africa, Morocco, Tunisia, Algeria, who grew up hearing first-hand accounts of Arab brutality are well represented within those making it to Israel. French friends in Israel tell of even secular relatives considering aliyah.

But, how many more colored dots must be added before ALL French Jews finally get the message??

Don't forget the increase in security clamp downs which will invariably become more frequent, as the terror attacks continue to increase.

Oh, yeah, and as per usual, Jews are getting blamed for the attack,...carried out by a Tunisian French national. Go figure.

Did you save your French Tri-Color filtered profile that you made the last time their was a terrorist attack in France, to show your solidarity with the French people? 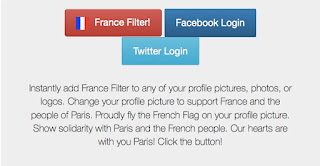 How many, French, German, British, and Americans do the same whenever there is a terror attack in Israel?

Of course, I am not counting the Christians who want to be our friends,...and then take our Land, then later on, our souls.

I am also not counting the terror attacks, which the Israeli Government determines to be criminal, instead of nationalistically motivated.


The bottom line is that the Land of Israel is the only homeland of the Jewish People, the only place on earth in which Jews should investment their money, energy, and their very lives.

Don't think the Israeli Government is doing enough to protect its own citizens?

Don't think it is doing enough to promote what you believe to be important in a Jewish Homeland?

Then put your money where your mouth is, pack your bags, and get on a plane!
Posted by Esser Agaroth at 4:31 PM