Oh, I feel like such a hypocrite now, having posted "Beware Of Governments Bearing Gifts: Israeli GPO To Begin Issuing Press Credentials To Bloggers."

After being threatened with blackmail by a fellow blogger, I am now forced to confess.

Jewish Bloggers have been receiving Israeli press credentials for quite some time now.

I didn't want to say anything. People might think I'm a government stooge or something, for having passed the scrutiny of the Israeli Government Press Office [GPO].

Then said fellow blogger happened to "discover" an old press badge of mine. I thought that I had lost it long ago.

But, now everything makes sense. I was stupid enough to show it to said fellow blogger one day,...bragging about how I have received one, and he didn't.

Pretty stupid,...bragging like this. I soon "lost" this badge. It was toward the end of the year, and was soon to be issued a new one anyway.

The truth that I am ashamed, and have kept my secret status hidden for years, not wanting to be stigmatized as one the government's PR robots, or worse yet, one of it's "branders."

But, now, I see that I have no choice. I have to come out of the proverbial "press credentials" closet. Here it is, my press badge, proof positive that I'm "one of them." 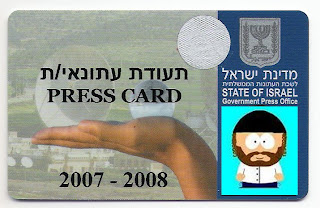 I thought that by toning down my blog to a level of mere "moderated extremism," that I would be able to get my press credentials, and then seize all of the various opportunities around every corner to ask the hard questions, listen in on backroom meetings in the K'nesseth, and secretly tape-record the occasional drunk official or intern, pumping them for critical information.

But, alas. The K'nesseth may be situated near a rose garden , but being in the press corps is, in no way, a bed of roses.

Sorry, Jameel. I'm sorry to be the one to throw a stick into your spokes, hit your head against the wall of reality, give you a taste of the bitter truth,... Well, you get the point.

Being a member of the elite Israeli Press Corps is not "all that."

The buffet table includes lox from China, not Norway. Our special restrooms only have one attendant, and never enough hypoallergenic hand lotion. And, MK Zahava Gal-On is always trying to point out MK Dalia Itzik's fashion don'ts to me, whispering them into my ear. Honestly, people are starting to talk...

And, I'm suppose to report this stuff?

The truth is that no one cares. People care about the economy, about getting a job, and supporting their families, about whether they're going to get kicked out of their homes any day, about what their kids are learning, or not learning, in school, and whether they'll come home safely or get killed in a terrorist attack (Has weHallilah, Lo aleinu!), not about Opposition Leader Tzippy Livni leaving her house with mismatched earrings, and whether this will set off new, and unfortunate fad among Israeli women.

So, if you're a blogger and want to receive a press pass, then I will simply say to you what we say in sarcastic Hebrew at such junctures...

Just don't come crying to me when Prime Minister Binyamin Netanyahu insists on boring you with old jokes from his days at MIT.

You're a clandestine stringer for The Onion!

it should say on your GPO Press Card:

PS: I could have gotten a press card years ago, as I'm loosely affiliated with all sorts of respectable print editions of newspapers.

What does MASHTAP stand for?

I don't believe you lived in Tapuakh and don't know what a mashtap is.

I'll spare you the embarrassment this erev yom kippur from spelling it out :-)

If you had written it in Hebrew in the first place....

mishtatef pe'ulah, is what I think it means, IOW, colaborator.

Unfortunately, I am all too familiar with such individuals.

Obviously, you're playing along with the sarcasm of this piece.

Obviously, you're playing along with the sarcasm of this piece.