UN Secretary General is Living Under a Rock! Or is he?

And here's the proof! 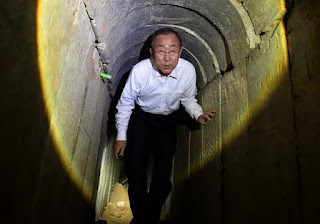 In a statement delivered by his spokesperson, United Nations Secretary-General Ban Ki-moon said on Saturday that he was "alarmed" by the recent statements from the Hamas leadership in Gaza stating their intention to continue building tunnels and firing rockets at Israel.

"Such statements and actions put at risk reconstruction, humanitarian and development efforts by the international community and Palestinian and Israeli authorities," Ban said. "They also do a serious disservice to the long-suffering people of Gaza."

The secretary-general added that "after three major conflicts in the past seven years, people in Gaza and the people of southern Israel deserve a chance for peace and development."

He also reiterated that he condemns terrorism "in all its manifestations" and added that every effort must be made to improve the living conditions of the people of Gaza.

During a funeral for seven Palestinian Hamas operatives who were killed when a tunnel they were digging had collapsed on them earlier this week, senior official Ismail Haniyeh vowed on Friday that the Islamist organization will continue in building its network of underground passages.

“The Hamas military wing will continue with its preparations both underground and above ground,” the former prime minister of the Hamas-ruled Gaza Strip said. “On land and at sea, we will not stop until the liberation of the holy places [in Jerusalem].”

Hamas announced on Thursday that seven members of its military wing, Izzadin Kassam, were killed when a tunnel collapsed. (cont.)

Esser Agaroth (2¢):
Is the UN Secretary General really that naive? I think not. The following clip from the classic film Casablanca (1942) sums up his reaction to a tee.


Furthermore, when a terror organization which takes pride in every Jew it kills, honors the murderers as holy martyrs, and reiterates its desire to annihilate the Jewish People, every chance it gets, makes its intentions even clearer with statements such as...


Hamas officials said that they were “proud that hundreds of our men are working quietly to prepare for defending and protecting our people over and under the ground.”

“The Gaza Strip has built twice the number of resistance tunnels that were built in Vietnam, a subject which is studied in military schools,” Haniyeh said on Friday. “The military wing has built tunnels around Gaza in order to defend it and to liberate the al-Aksa mosque and the holy places.”

Haniyeh said on Friday that Hamas would also continue its efforts to perfect rocket and missile fire.

“In eastern Gaza, heroes are digging tunnels underground, and in western Gaza heroes above ground are conducting test launches of rockets,” Haniyeh said.

Haniyeh said that the armed factions in Gaza are preparing for the next round of fighting with Israel.

...it makes it all the more clear that United Nothings Clown General Ban-ki Moon must be living under a rock,...that is, under a rock without television, radio, or internet. Or is he?


...reacted to the collapse by denouncing Hamas leaders as "merchants of war who know nothing about life other than burying their youths in the sand."

Fata"h, of course, wants to wipe Israel off of the map, too, but is perhaps a little bit more patient going about its attempts to accomplish this goal, than Hamas.

Just look at the map embedded in Fata"h's emblem. Apparently, Ban-Ki Moon is oblivious to this fact as well. Or is he? 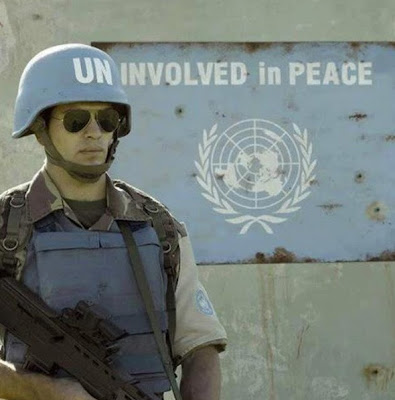 Perhaps, the UN Secretary is not as clueless as most all news sources have lead us to believe.

Maybe, he just hates Jews. Ever thought about that?

Either way, he is still a just clown, albeit a very dangerous clown to the Jewish People.
Posted by Esser Agaroth at 9:10 AM