Well, there I was, minding my own business, when I noticed several new notifications on my

Imagine my shock when I found that I have been added to the following groups!

Actually, I'm just kidding. I wasn't shocked at all. I even "thanked" the Jew-hater Kenneth 'Cha' Mac who added me!

The link I tweeted here is to Debunking Israel's Indigenous Argument, informing him, and everyone else, of the irrelevance of who was in Israel first. But, the Pseudostinians certainly weren't. That's for sure!

Then I noticed the cross in his mouth and next to his Twitter profile name. I just couldn't help myself. So, I tweeted a link to Disproving Christianity in 10 minutes to him. Before posting these screen shots of our Tweeting extravaganza, I erased part of the cross next to his username. I didn't want that avodah zarah (foreign worship) crap displayed on my site. 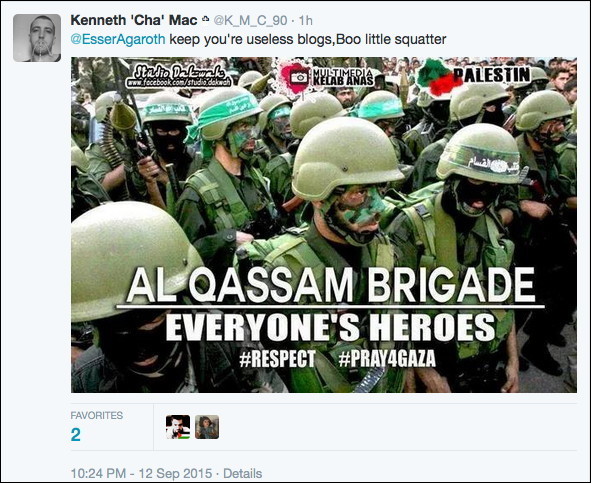 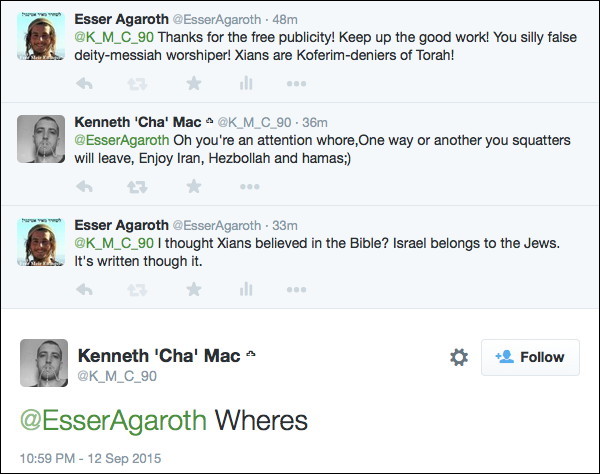 The link I tweeted in response to his "Wheres" tweet is to this graphic. I included the Torah verses here, as well. Granted, this is only one of many sources of The Almighty's promise of Eretz Yisra'el (Land of Israel) to the Jewish People. But, as I tweeted above, it is one of my favorites!

I suppose that his query here is a reference to waiting from Mashi'ah (Messiah) to come and do everything for us. My response speaks for itself.

This was my last back-and-forth with Kenneth 'Cha' Mac, as soon afterwards, he blocked me.

And, don't think I'm removing myself from those groups either. I'm not one of those sissy Hasbara Jews. I don't give a rat's tuchus as to what the goyim think of me, my people, or my homeland. Sounds like a great publicity tool to me, don't you think?

Well, after this exchange on Twitter, it is only appropriate to wish everyone a שנה טובה ומתוקה/ Shannah Tovah u'Methuqah, a Good and Sweet Year, with an re-posting of Lehava's own blessing. Lehava is an organization which works against Jewish assimilation, including intermarriage. (Tip: former MK Micha'el Ben-Ari).

One of the symbolic foods eaten by Jews on Rosh HaShannah is the תמר/tamar (date). Its sound tamar similar to the Hebrew verb tam (to finish), it is eaten with the following blessing.

"Sounds like a great publicity tool to me, don't you think?"

I'll never get to meet my father-in-law, but my husband always says he used to say, "I don't care what people say about me; it's when they stop talking about me, that I worry!" Your statement above would remind us of him.

In LA, they say "Any publicity is good publicity."

In NY, they say "No publicity is bad publicity."

Won't see you tomorrow, though. Not this year.