Um,...no. But, now that I have your leftist, Islamo-slobbering attention....

Who else was awoken at 6:00am this morning by the muezzin (caller to prayer)? After years of living in the Shomron (Samaria), I thought I had habituated to it, and I had. Here in Jerusalem, next to an Arab neighborhood, my successful habituation has been holding up.

However, this morning, we were awaken by special prayers and sermon, and particularly loud ones at that, for the Muslim Eid al-Adha, which celebrates the conclusion of the Hajj to Mecca, and commemorates the Muslim belief that Avraham brought his son Yishma'el for sacrifice. Even though any Jew would tell you that Avraham brought his son Yitzhaq to be sacrificed, while Yishma'el waited at the foot of the mountain Har Moriah (Temple Mount), with his servant Eli'ezer, and the donkeys.

This is why I was taken aback by the Times of Israel's Eid Mubarak (Blessed Holiday) greeting yesterday evening after Yom Kippur, not just condoning, but celebrating kefirah (denial of the Torah). 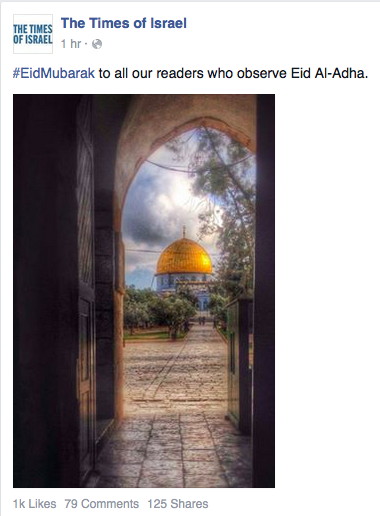 In addition to their distortion of one of Avraham's aforementioned tests (10 tests in all, Mishnah Avoth 5:), Muslims will tell you that the Ka'aba, which was recently threatened with destruction by a falling crane, was built by Avraham, and that their pebble throwing at a representation of Satan cam from Avraham as well. Even though pebble [not stone, not rock, not sticks, but pebble] throwing was associated with the worship of Mercury, long before the invention of Islam.

Law of Repentance 3:17 [8]
...And one who says that the Creator exchanged one mitzvah (commandment) for another, has already cancelled the Torah itself, even though he says that it [the Torah] was from The Almighty, like the Christians and Muslims....

This provides us with yet another reason what the Times Of Israel should be more aptly called the Times of Arabia.

As a self-proclaimed Christian, who is also supposed to to believe in the Written Torah, and thus Avraham's sacrifice of his son Yitzhaq, not Yishma'el, it seems that U. S. President Obama is also suborning denial of the Bible by wishing Muslims a "happy holiday."

US President Barack Obama on Wednesday sent holiday wishes to Muslims around the world celebrating Eid al-Adha on Wednesday.

"As more than 2 million Muslims from around the world and across the United States mark the end of their holy pilgrimage of Hajj in Mecca, Michelle and I extend our warmest wishes to Muslims around the world celebrating Eid al-Adha," Obama stated.

"This pilgrimage and Eid is about sacrifice, almsgiving, and equality," he said, adding that the Hajj is reminiscent of the principle upon which the United States was founded: e pluribus unum – out of many, one.

Obama also praised the spirit of giving to the needy on Eid al-Adha, stating that "Muslim American organizations are among those at the forefront of attending to victims in this refugee crisis."

Of course, the "crisis" is not really a crisis, and Islam has nothing to do with equality.
Posted by Esser Agaroth at 1:42 PM