Wake Up! Ann Coulter Is Right!

As usual, Jews are all up in arms about Ann Coulter's latest tweet, and her use of an expletive,...no, and intensifier. Seriously?

I wonder if they realize just how much free publicity they are giving her?

As a Jew is doing the best he to do what he is supposed to do, that is following the Torah, including living in Eretz Yisrael (Land of Israel), the Jewish Homeland, not only am I not surprised by Ann Coulter's statement, but I also agree with her,...sort of. 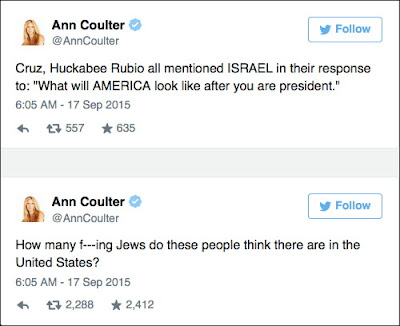 Like it or not, everything in the U. S. Government and news media does seem to be too focused on Israel.

Aren't there a few other things more pressing on the minds of American politicians, such as the drought in California (not to mention its water-hogging, Federally protected minnow), renewable energy, the slavery of American citizens to the banxsters, or how the current administration has already decided what to do, or rather what not to do about its borders and inflow of illegal immigrants (and Muslim terrorists), and that it seems that the next administration, Democratic or Republican will probably not do anything much differently?

Then, of course, there are the various American Jewish organizations such as the Anti-Defamation League [ADL] and American Israel Political Action Committee [AIPAC], which I will continue to consider to be absolutely worthless, until they finally start advocating mass aliyah (Jewish immigration to Israel). Apparently, they do not have anything better to do than to whine about people calling us names.

Get over it! Do something actually helpful! Send a disabled Jewish kid to camp! Feed the Jews living under the poverty line! (Yes, there are such Jews.) Fund Jewish education! Of course, I mean real, Jewish education, not that Torah-distorted, "do what I want" crap, "Jewish leaders" are trying to pass off as Jewish.

Now, as for Ann Coulter, although she deserves brownies points for mentioning the ever present elephant in the room, as does she for pointing the following observations in her in the Jewish Press (July 4, 2006).

By the way, Ann, the brownies are pareve, dairy-free, so you can eat them after a steak. Oh, wait a minute! Ann Coulter's a shiqtzah, so she doesn't have to worry about all that. Yes! I used that word! Heaven forfend!

Yes, I did use that word! Get over it! For all I know, Ann Coulter has used the word herself. Oy Gevald! I just called Ann Coulter a name. Do you think she cares?

I am guessing that Ann Coulter doesn't give a rat's tuchus as to which names she is called, or what most other people think of her. And, I believe that we (co-dependent) Jews would do well to take a lesson from Ann Coulter on this point.

Here are some snippets from the Ann Coulter's interview in the Jewish Press:


Why, when it comes to terrorism in Afghanistan or Iraq, does the U.S. apply a strong hand – but when it’s Palestinian terrorism against Israel, there’s not the same tenacity and determination?

Probably because of the formidable left-wing lobby, which has now added anti-Semitism to its sins. (I guess that makes left-wing Jews self-hating. But, I've been saying that for years.)

Have you ever written about Israel? If not, why not?

I rarely write about any country other than the U.S. There are too many big juicy fish to fry right here at home! Also, I’m a Protestant girl from Connecticut and there are many other capable writers who know a lot more about the subject than I do. In fact, I just started a screenplay about a Connecticut shiksa like me trying to become an expert on Israel. It’s called “Mission Impossible IV.” (See?! I was right! She has used this word to describe herself!)

What are your feelings about the disengagement from Gaza last year? Since Israel’s withdrawal from the area over 500 rockets have been fired from Gaza into Jewish communities. Al Qaeda has moved into the territory abandoned by Israel. Iran is looking to establish an embassy there. Egypt has accused the Gaza terrorists as targeting them as well.

My first thought is that the Jewish people may not drive as hard a bargain as I’ve always been led to believe. I take it this is part of a long-term Israeli strategy to achieve lasting security by giving up some disputed areas while re-doubling efforts to protect their new, smaller boundaries with measures such as the security wall, which I understand has been very effective in keeping suicide bombers out. By the way, would you happen to know where the U.S. could get one of those walls? One about, oh, seven hundred miles or so long? No special reason, just curious. (I hope people understand that she's being sarcastic about Israel's "brilliant" strategy. You never know....)

What about the planned withdrawal from the West Bank, from which rockets can hit Jerusalem, Tel Aviv and Israel’s International Airport?

If you start a war and lose, you lose your land. Next.

Do we Jews have such short memories? Halavai there should be many more Ann Coulters able to make such observations, and not afraid to say them out loud. So, she says that Jews need to be "perfected." I think that she needs to be perfected. Who cares??
Ann Coulter doesn't.
Posted by Esser Agaroth at 9:34 AM