The Wicked Witch Of The West Visits Israel

US Secretary of State Hillary Clinton was taunted by chants of "Monica, Monica" by tomato-throwing demonstrators as she visited the Egyptian port city of Alexandria on Sunday.

US Secretary of State Hillary Clinton landed at Ben-Gurion Airport Sunday night for a two day visit. During her stay, Clinton is expected to meet with top level officials. Clinton arrived on a flight from Egypt shortly along with US Middle East envoy David Hale and Under Secretary of State for Political Affairs Wendy Sherman, who represents Washington at the talks between world powers and Iran.

However many of us would like to believe the contrary, Clinton is not a stupid person.

She is an intelligent,calculating, and nefarious individual, higher up on the ladder than her President Obama,...much higher.

She should have known this would happen, and that this would throw a rock (or, in this case, tomato) right into her plans to raise Islam up on a pedestal,...high enough so that she can lead all Americans to kiss its proverbial tuchus.

So, Clinton's plans did not go as planned.  Did she really miss this one?  Or did everything go just as expected.

What's she up to?

US Secretary of State Hillary Clinton landed at Ben-Gurion Airport Sunday night for a two day visit. During her stay, Clinton is expected to meet with top level officials. Clinton arrived on a flight from Egypt shortly along with US Middle East envoy David Hale and Under Secretary of State for Political Affairs Wendy Sherman, who represents Washington at the talks between world powers and Iran.... 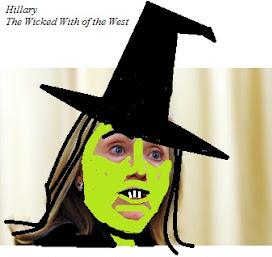 Well, the last time Clinton was in Israel,...
On other words, she lied.  Actually, she lied quite a bit.
Gee, Madame Secretary, ever read the Bible??

Clinton's husband Bill, notably called Yitzhaq Rabin his "haver" (friend).  You know, the same Yitzhaq Rabin who's troops fired on the Jews on the Altalena, killing several, and gave weapons to the Palestinian Authority, results in the deaths of countless, more Jews.

Clinton's daughter Chelsea, married a Jew, thus collaborating in the Second Holocaust (intermarriage), and leading this Jew even farther away from heritage, much like the Canaanite and Midianite women of old.  May HaShem guide them back to their proper paths!

And, what's this I see?  Baruch C. Cohen from American Trial Attorneys Defending Israel provides us with this photo.


Apparently, this picture was taken, just after this terrorists widow spoke, accusing Jews of various lies, while Clinton just sat there!  She didn't walk out; she KISSED her!

I debated whether to present this picture of these two disgusting cows on my blog, or not.  But, the world must be reminded of the truth.

I'd say this picture is worth well over 10 million words.

Secretary Clinton, please mind your own business.  Get on a plane, and go home.  Wanna cut off aid to Israel?  Go right ahead.  It will be difficult for us at first, but better for us in the long run, forcing us to stand on our own two feet.  We might even finally kick out the hostile Arabs.

But, you wouldn't like that, would you?
Posted by Esser Agaroth at 5:38 PM

"Wicked witch of the west", stupid cows...you really sound angry! But in this whole rant I can't figure out what you are angry about, BTW your stating that we would be better off without American aid is an empty platitude. Here I would go as far as to say G-d Bless America for continued support in our ongoing war against our many Enemies.
I have often said that the reason the modern Zionist revolution has succeeded B'chasdei Hashem where the Bar Kochba Revolt failed is because back then we were fighting against the major world power ,Rome, whereas today the major world power supports us and continues to pay for our defense.I don't really care what Hillary says and don't expect her to join the Likud. What is important is that the US continues to back us especially in trying to deal with Iran, G-d forbid that we should have to stand alone against Iran.

America is one of our greatest enemies.

As one of Esau's various manifestations, it is sneaky. It is cunning, baffling, and powerful.

Yishmael's weapon maybe the sword, but Esau's is often the smile, parallel to the non-kosher part of its representative animal, the pig (the oral part, whereas the camel, rabbit, and hyrax have limbs which are problematic).

It smiles and it lies.

It's "our friend," but what it its real motivation? Please think about that.

We have become dependent upon the U. S., and we need to be dependent on HaShem.

Assuming I believed in democracy, which I don't, the Israeli gov't should be doing what the people want. It does not. The majority of Israelis do not want to give up land, among other things. But the Israeli gov't doesn't care. It does what the goyim want (US, EU, UN).

Any dissension is only a distraction from the big picture.

Isn't it possible that Bar Kokhba failed because he asked HaShem to stay out of it? Isn't that when things started to go sour? Just some more food for thought.

David, what's the best way to send you something privately?