Leave The Turkeys Behind! 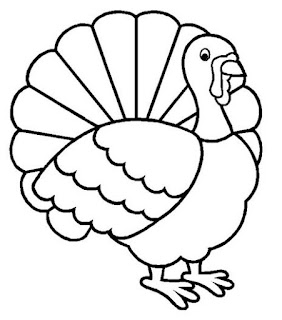 Print this out and given to your kids [or spouses] to color so they don't bother you in the kitchen!

Also, please don't forget two things: 1) Make sure to cook your turkey stuffing separately, then stuff it afterwards. This way you won't risk under-cooking parts of your turkey and put your family at risk for food poisoning (God forbid!). 2) To my brothers and sister in the galuth (diasporah), physically and spiritually, please take at least the effort you're taking now, to prepare for Thanksgiving, to prepare for the Rosh HaShannah, Sukkoth, Pesah, and Shavu'oth holidays,...and eventually every Shabbath. 3) If you don't know what one, or any, of the above are, please do not be embarrassed. Make a commitment to yourself to call up your local Orthodox* rabbi and ask. Don't feel connected with him? That's OK. Call another one!

Thanksgiving is nice, and certainly one of the least offensive U. S. holidays,...IMHO. But, don't forget...you're Jewish! You're heritage and traditions, at the very least, deserve more regard, time, and effort than American holidays!

For my brothers and sisters who are not familiar with American holidays,...and slang, feel free to e-mail me for the double-meaning punchline of the caption above.
************************************************
*The term "Orthodox" is used for clarity. In the U. S. Jewish concepts can be very confusing, especially due to those who distort, or even reject, Torah sheb'al peh (Oral Torah), a crucial segment of our rich tradition, without which, it is impossible to comprehend fully the Torah as a whole. Many of these people refer to themselves as "rabbis," thus it is important to distiguish rabbis, those who observe and teach the Torah, from these other people.
Posted by Esser Agaroth at 3:16 PM No comments:

Hints of the Next Expulsion..." May God Forbid!...

Not too long ago, U. S. Secretary of State Conadaleezza Rice YSh"W expressed her vision for more expulsions of Jews from areas of Eress Yisrael,...including from the Jordan Valley (See below, Regarding Concessions For Peace, 17 Tishrei).

PM Sharon YSh"W has stated that he does not consider giving up the Jordan Valley as an option.

By now we should all know the worth of Sharon's words: Zero, Zilch, Nada, Klum....

Even former Israeli PM Ehud Baraq's proposal for giving up much of Judea and Samaria held onto at least part of the Jordan Valley. Baraq, a military man, albeit a leftist one, even knew the danger of allowing the Yishma'elim (Arabs) within Israel [some refer to with the misnomer "palestinian"] to share any border with Jordan.

Yet, read the recent report by Arutz 7 below. Is this unchecked Yisma'elite activity a hint of the next stage of expulsion of Jews from our Land? May God forbid!

Israeli citizens, please contact MK's regarding this most obvious next step.

U. S. citizens may find their U. S. Reps. and Senators to ldge their protestes at www.house.gov and www.senate.gov respectively.

U. S. Secretary of State Rice may be contacted through the www.state.gov website. Please include complaints regarding her recent, unfortunately succcessful, push for Israel to relinquish control over the border between Gaza and Egypt.

(IsraelNN.com) The government has allowed Arabs to take over thousands of acres in the Jordan Valley, according to charges made by Jordan Valley Regional Council leader Dovi Tal. He said Civil Lands Administration officials have ignored Arab confiscation of lands while demanding lease money from Jews who farm government land.

"Two and a half years ago, the IDF abandoned several camps, and there was an agreement with the defense and agriculture ministers that we could use the land for farming," Tal explained. "Nothing happened because the Lands Administration wanted lease money...but the Arabs have no problem in taking over the land" without any government interference.

Posted by Esser Agaroth at 8:39 PM No comments:

Email ThisBlogThis!Share to TwitterShare to FacebookShare to Pinterest
Labels: Israeli Politics, Life In Israel, U. S. Threat, U. S. Troops

Shimshon Cytryn Has Finally Been Freed!

Finally! Shimshon Cytryn has been released into the custody of a rabbi until his trial on the trumped up charges of attempted murder. The totalitarian government had planned to hold him over in prison until trial, which could take several months.

According to Shimshon's parents, he will be under the supervision of the head of an academic yeshiva until trial.

Posted by Esser Agaroth at 4:45 AM No comments:

I will be more than happy to remove you from my mailing list. However, I cannot take responsibility for the automated e-forwarding and e-distributing set up by some ADL branches.

I will continue to e-mail the ADL.

The "Write-A-Letter, Make-It-Better" and "Educate the Goyim to like us and valid our existence" ADL *must* be kept aware of pressing issues in Israel.

If different ADL branches want to numb-out and remain in denial (I'm *not* referring to you, as you did not state the reasons for wanting to be removed from my list.) regarding certain basic Torah precepts such as "Yishma'el is a pere adam" (a wild-animal man) and "Esau sone eth Ya'aqov" (From Haza"l: "Esau [Rome] hates Ya'aqov [Israel]") then they will have to make the effort to block my e-mail address or set up a filter to send it directly to the trash folder.

Oh, yeah, I almost forgot. "Land For Peace" not only doesn't work, it is forbidden under Torah Law,...the contradictory opinions of "rabbis" who compromise Torah principles in order to scrounge money for their communities not withstanding.

Please note that this e-mail will be CC'd to other ADL e-mail addresses, after I have removed your name and any other identifying information.

The "Red Diamond:" Israel Should Say "NO"

CONTACT THE AMERICAN AND INTERNATIONAL RED CROSS AND VOICE YOUR OBJECTIONS


This proposal begs the question: Why do Jews still care about what the goyim think? Why must we continue to seek their validation of our existence and place in the Universe?

Hmm...no, let me correct that. Israel should tell them both where to get off.

The Red Cross knew damn well what was happening to Jews HY"D at the hands of the Nazis YSh"W. But instead of doing anything about it, they used a Nazi-approved visit to the Terezanshtat "Model Artist Colony" (Read: "Concentration Camp") to justify their denial that anyting out of the ordinary was going on in the then relatively "Arab-free" Europe. Clueless to the messages of Nazi atrocities embedded in the Terezanshtat Jews' artwork, the Red Cross did nothing to help save Jews from being slaughtered in the Holocaust.

I will not even get into the blatant marginalization of the Red Cross/Red Crescent by disallowing Jews from determining our own symbols for our own organizations.

Who cares? Worried about Jews not being provided necessary services in their countries of residence by those governments or by those other organizations? Then help to bring those of us still stuck out there, both physically and spiritually, to get out of those dangerous places, and to come to Israel.
Posted by Esser Agaroth at 11:21 AM No comments:

Shimshon Cytryn still sits in jail on trumped up charges, even though eye witness testimony has suggested he did not even do what he was accused of doing -- throwing rocks at a Yishma'eli (Arab).

Even if he was throwing rocks, [the leftist] Channel One news has clear film footage that the "wounded" Yishma'eli instigated the incident. Thus, Shimshon would only have been involved in an act of self-defense.

As his mother says below, it's all politically motivated.

How many Arab terrorists have been released AND repeated their crimes against Jews, like in Be'er Sheva (lehavdil)? Many.

How many non-religious Israelis accused of murder are released on house arrest until the trial?