Boy, was I pleasantly surprised to find that I would be hosting Haveil Havalim this week.  As I write this introduction after Shabbath, I will have an extra hour work on it.  Because in Israel, we are changing back to standard time already.

The mnemonic device many of us learned as kids was...

So, this change gives us an extra hour, so to speak, to catch up on everything we need to catch up on.  It's only an hour, but I'll take it!

Actually, this week, Rafi at Life In Israel provides us with a bit of history and the latest, Israeli clock-changing controversy in Fighting About An Hour.

Founded by Soccer Dad, Haveil Havalim is a carnival of Jewish blogs -- a weekly collection of Jewish & Israeli blog highlights, tidbits and points of interest collected from blogs all around the world. It's hosted by different bloggers each week, jointly coordinated through our Facebook Group., and headed up by Jack.  The term 'Haveil Havalim,' whichmeans"Vanity of Vanities," is from Qoheleth, (Ecclesiastes) which was written by King Solomon. King Solomon built the Holy Temple in Jerusalem and later on got all bogged down in materialism and other 'excesses' and realized that it was nothing but 'hevel,' or in English,'vanity.'

Many of you have probably seen the use of the letters of the Hebrew year as an acronym.

This year is תשע"ג.  I have seen some standard ones, and some highly politically-incorrect ones.  For this edition of Haveil Havalim, I would like to provide you with the positive and upbeat one I came up with:


תהא שנת עליה גדולה
It should be a Year of a Great Aliyah!

Oh, you can play with this, if you want.  Take the word aliyah, and apply it to your spiritual growth, your salary, or any other goal.  But, the meaning I intended here is...

And now on to our regularly scheduled program...

Yitzchak at Think Judaism asks, "Must I Wear A Hat?"  So, does he?

In Aaron Hai's lengthy essay on the Ten Commandments, on his Jewish Teachings Blog, he reveals some pearls related to Yom HaKippurim.  Search the page for "Yom Kipur."

Batya brings us two Rosh HaShannah posts, Reflections: Soul Jarred By The Sound Of The Shofar at Shiloh Musings, and Greetings For A New Year at Me-Ander.

Susan Esther Barnes at Religious And Reform shares her experience leading Rosh HaShannah services this year in Embracing The Awkward.

Josh Waxman at the Parsha Blog tell us Why You Didn't Hear 100 Shofar Blasts On Rosh HaShannah.

Leah at In Gathered asks, "How Yom Kippur Turn Sins Into Merits?"

News and Current Events
Tomer Devorah provides us with the Important News Of The Day, and also asks Where Is Bibi Netanyahu? Kind of disturbing that the Israeli public was not informed that the prime minister would be away for Rosh HaShannah, no?

Anthony Reich at The Israel Situation writes about Israel's Fifty Fateful Days.  Tzachi HaNegbi?  Is he still around?

Jewish Israel [JI] reports on what Trinity Broadcasting Network [TBN] was up to while Jews were observing Rosh HaShannah.  "Piece of dirt," huh? JI also reminds of the Core Mission of the International Christian Embassy in Jerusalem [ICEJ]. Do we really want their support?

The Real Jerusalem Streets gives her opinion on that video which everyone has been talking about, and then provides us photos of what has been going on her neck of the woods, while Muslims rage elsewhere, in Muslim Rage And Yom Kippur In Jerusalem.

Speaking of Muslim rage, check out Aussie Dave's series Wacky Hamas Terrorist Profile Of The Day on Israelly Cool.  Wait a minute.  Should I have put this under "Humor?"  Speaking of terrorists, he also reports on The Female Terrorist Who Met Her Match.

Ariel at The Torah Revolution stirs the chollent pot with "Why Was Migron Punished?"

Batya at Shiloh Musings opines on Jewish Values And IDF Conversions.  Batya and I are two JBloggers who agree on various issue quite often.  This is not one of those times.  She also writes about Israeli Needing A Strong Right Opposition, Not A Bloated Cabinet. Thumbs Up!

A Soldier's Mother shares an interesting story from the Yom Kippur War in The God Of Abraham, Isaac, and Jacob.

Sultan Knish brings us Anti-American Savages Of The Post-American World.

What's President G. W. Bush's taste in matza?  Why did everyone look so bedraggled at President Obama's Hanukkah party last year?  Find out the answers to these questions and more from Yair Rosenberg!

Michael Koplow at Ottomans And Zionists reveals some insights into U. S. - Israeli relations in When Ehud Met Rahm.

An Aspiring Mekubal will be hosting next week's edition.

To our qualified blogger, if our on-line submission form, hosted by blog carnival starts to act suspicious, then it's time to join our Facebook Group,...which you are welcome to join anyway.
Posted by Esser Agaroth at 5:29 PM 3 comments:

Show Me The Money! African Financial Burden On Israeli Citizens 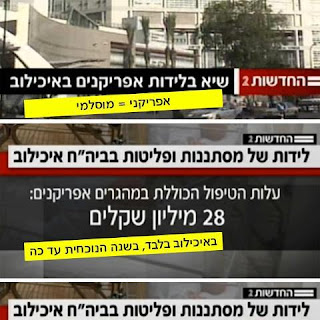 Record number of African (Muslim) infiltrator and refugee births at Ichilov Hospital in Tel Aviv.  Cost? 28 Million Sheqqels!  That's just Ichilov, and only for this year (2012) so far.

How many times have you complained about a salesperson, a company, a radio station, or anyone or anything?

The coach of your favorite sports team perhaps?  The weatherman for "getting it wrong" maybe?
How often have you made the call, waited on hold for an hour, or wrote that letter in order to make certain that your complaint was heard and acknowledged, so that you could obtain justice, or simply feel vindicated?

Now, how many times have you got to the same lengths and efforts to compliment someone on a job well done, or for going the extra yard to help you investigate and solve a difficult situation?

What about just taking the extra minute to go over to a store manager to say that you enjoy shopping there?

Do you take at least half the time to say or do something positive for those who have helped you, that you take when complaining to make yourself feel better over some harm that you believe you have incurred?

Well, then, here is my challenge.

Before Rosh HaShannah, do one thing, just one thing which helps another person.

You can either say something positive about someone to his boss, or do something nice for total strangers (*with their permission, of course!).

I, myself, finally called the supervisor of some people who have been very helpful to the company where I work.  Maybe tomorrow, I will do it again.

Sounds simple, doesn't it?  We're generally nice people, aren't we?  How many times have we thought, "Gee, that person was helpful.  I really should tell her supervisor," but never ended up following through?

Shannah Tovah!
Posted by Esser Agaroth at 12:14 AM 5 comments:

Qeriyath HaTorah this Shabbath is when the "Blessings and Curses" are read.

Last night, I had the pleasure of meeting a young man on the bus back from Tel-Aviv, a Jew who truly has received the "Blessings" (בלי עין הרע).

Gavriel Chouraki, a 20-year-old soldier in the Israeli Defense Forces [IDF], immigrated to Israel with his parents at the age of 10.

Blessed to escape the eventual devouring of France by Islam, blessed by the and blessed to reside in the Land of Israel, Gavriel has also been touched by the blessing of music!


Classically trained, Gavriel only recent began exploring the world of Jewish Music.  At this year's Klezmer Festival in Tzfath, he was spontaneously invited up on stage by Israeli singer David d'Or.

His position in the IDF is that of Hayal Moreh, "Teaching Soldier," allowing him the opportunity to share his blessing with Israeli elementary school students.

I am quite tardy in fulfilling my duty to inform you that this week's edition of Haveil Havalim is being hosted by A Soldier's Mother.

Check it out!
Posted by Esser Agaroth at 11:51 PM No comments: