Esser Agaroth (2¢):
What father cannot understand this feeling expressed here by MK Oren Hazan in the photo above?

One of the reasons I like Oren Hazan is that he's the people's Member of Knesset, and he says what he thinks. This sometimes may get him into trouble, and who knows what it will do to his standing in his current Likud Party.

But, so what? People like him; we can relate to him.

Esser Agaroth (2¢):
One European rabbi seems to be able to read the proverbial writing on the wall.

(JTA) — Commenting on deadly attacks in Catalonia, the chief rabbi of that region in Spain said his community is doomed, partly because of radical Islam and the alleged reluctance of authorities to confront it.

Rabbi Meir Bar-Hen has been encouraging his congregants to leave Spain, which he called during an interview with JTA a “hub of Islamist terror for all of Europe,” for years before the attacks Thursday and Friday, he said. At least 14 victims and five suspected terrorists were killed in Barcelona and the resort town of Cambrils, 75 miles south of that city.

To Bar-Hen, whose community on Friday resumed activities that it had suspended briefly following the Barcelona attack, “Jews are not here permanently,” he said of the city and region. “I tell my congregants: Don’t think we’re here for good. And I encourage them to buy property in Israel. This place is lost. Don’t repeat the mistake of Algerian Jews, of Venezuelan Jews. Better [get out] early than late.”

A white van on Thursday careered into crowds on Las Ramblas, Barcelona’s feted thoroughfare, when the street was packed with locals and tourists. Along with the fatalities, more than 100 were injured. The driver of the van fled on foot and was believed to be still at large on Friday. Police shot dead another man at a checkpoint Thursday. The Islamic State terrorist group claimed responsibility for that attack.

Hours later, police killed five men during a raid in Cambrils whom police said were terrorists planning an imminent attack.

Part of the problem exposed by the attacks, Bar-Hen said, is the presence of a large Muslim community with “radical fringes.” Once these people are “living among you,” he said of terrorists and their supporters, “it’s very difficult to get rid of them. They only get stronger.” He also said this applied to Europe as a whole.

Unfortunately, he may have back-tracked a little:


Bar-Hen emphasized that he was speaking as a private person and not for all the members of his community.

Of course, there are always some hold outs among European "Jewish leaders." Whether it's because they like their positions of power or honestly "mean well," I have no idea. I have stopped trying to figure these people out:


Displaying a defiant and more confident attitude than Bar-Hen, the Federation of Jewish Communities of Spain issued a statement expressing “full confidence in security forces who work daily to prevent fanatics and radical Muslims from inflicting pain and chaos on our cities.”

And even though this European rabbi wisely points out more proof that Esau (The West) and Yishma'el (Arabs/Muslims) hate Ya'aqov (Israel), most Jews will unfortunately still ignore or downplay it:


Bar-Hen also charged that authorities and some politicians are reluctant to confront Islamist terrorism. He cited the government’s decision in April to allow Leila Khaled, a Palestinian terrorist who was convicted in a plot to hijack an airplane in 1969, to enter the country for a book festival. This showed authorities “do not understand the nature of terrorism, if they treat it as an action by the disenfranchised,” Bar-Hen said.

Too bad other European rabbis still don't have a clue. Or worse, maybe they do have a clue...

Posted by Esser Agaroth at 3:37 PM No comments:

Last night, one side of the pedestrian walking bridge connecting B'nei B'raq and Giv'at Shmu'el was knocked down by a truck. Arutz 7's Hebrew site reported on this accurately. 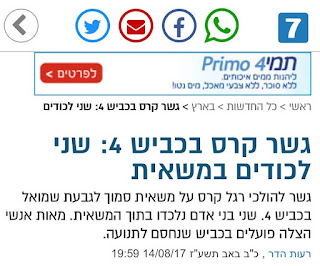 Arutz 7's English site did not. 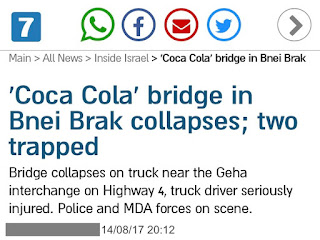 The bridge that collapsed was not the bridge at the Giv'at Shmu'el "Coca-Cola" Junction, but rather the next bridge north. The report appears to have been fixed, at least by midnight last night.

So, the writer made a mistake. Big deal, right? We all make mistakes.

But, c’mon! All the writer had to was to look at Arutz 7’s Hebrew counterpart’s report posted 15 minutes earlier. Not sure of the exact names of the bridges? Maybe the names are different in Hebrew than in English? (By the way, they’re not.) A quick search on Google Maps or Ymaps in Hebrew would have confirmed

Since 2005, I was invited to be interviewed by Arutz 7 four times. And I am happy to say that each time I turned them down. None of these radio talk show hosts even knew who I was, except that some of them knew that I had a blog (big deal!), a blog which none of them had ever bothered to read before inviting me to be interviewed. I don’t know about you, but this sounds pretty desperate to me.

I recall the time not too long after Arutz 7’s founding, the self-sacrifices of Rebbetzin Z. Melamed, David Shapira, and others suffering raids on the station in Beth-El and worse. Such times are long since over.

Around the time of the expulsion of Jews from Azza (Gaza/Gush Qatif) and the Northern Shomron in 2005/תשס״ה, then future MK Ya’akov “Katzeleh” Katz reported threats from outside of Israel to cease donations to the Yeshiva’s foundation, due to Rabbi Z. Melamed’s canceling of Rabbi Shlomo Aviner’s class at the Yeshiva. Rabbi Aviner’s rulings on taharath hamishpahah (family purity) were under scrutiny by a Beth Din (rabbinical court) set up by Rabbi Modechai Eliyahu ztz”l, issues which today have never actually been clarified.

Tensions in Beth-El rose due to disagreements over how IDF soldiers should deal with orders to remove Jews during the impending expulsion. Should soldiers follow them? Refuse them? Pretend to be sick?

As time went on, Judeo-Christian Values were being pushed by the head of the English division.

Cheerleaders for Christian “Friends of Israel” were being propped up as rock stars.

In 2010, I had the opportunity to witness just how many of the reports on their their news flash make their way to the site. News feeds are set up from other Israeli new sources in Hebrew, and they are translated. As far as I know, this is legal, and other news sites do this too. But, doesn't YNET, for example, pay a fee to the Associated Press [AP]? Just sayin'.

In all fairness to Arutz 7, according to one confidential source, close to a former head of the English division, donations, including donations from Christians, flow first through the Yeshiva’s foundation, then trickle into the Arutz 7. He also claims that what the “news” station receives is not very much.

But, who knows? Maybe Christians will feel sorry for Arutz 7 and pump some money into the station. Stranger things have happened.

And before Arutz 7 complains about this post, someone from over there should thank me for the free publicity.

Posted by Esser Agaroth at 9:38 AM No comments:


All of us are with the Prisoners of Zion:
The Israeli Supreme Court has decided to leave David Chai Hasdai in detention until final court proceedings imprisoned behind bars for all of his "offenses."

David Chai spoke with friends he was forbidden to by the Shabba"k (Israeli secret police), which was implemented without any court ruling nor any presentation of evidence.

David Chai joins other Jewish boys who are sitting in jail on suspicion of talking to their friends and thereby violating the administrative order they received without having committed any crime!!!

Esser Agaroth (2¢):
This is not the first time we have seen Jewish youth imprisoned for exercising their right to free speech, such as speaking to their friends.


Meir Ettinger was imprisoned for the articles he wrote, and probably also because he is Rabbi Meir Kahane's hy"d grandson. He was also forbidden from speaking with a list of 100 of his friends and acquaintances.


In the year תשס״ו/2006, months after the Israeli Government expelled almost 10,000 Jews from their homes and land in Gaza and the Northern Shomron (Samaria), three teenage girls from K'far Tapu'ah sat in prison because of their participation in demonstrations against the expulsion, and were also not supposed to be released until final court proceedings "because they will talk with the other residents of their town." And what was the problem if they were to speak with their neighbors? Because they might have influence over them.

Perhaps those who still claim that the State of Israel is a Jewish, democratic state will wake up and see that this is not at all the case, and that there is no such thing here as "freedom of speech."

Unfortunately, the probably won't.
Posted by Esser Agaroth at 9:16 AM 1 comment: