Israeli Elections: The Jewish Home Party Is Neither Jewish, A Home, Nor Even A Party. Discuss Amongst Yourselves

YNET: PM: Elections To Be Held Early
Prime Minister Netanyahu says that economic, security situation require elections for 19th Knesset to be moved up; vote expected to be held early in 2013

Prime Minister Benjamin Netanyahu announced in a press conference Tuesday that the elections for the 19th Knesset are to be moved up. He did not announce a date for the vote, which is expected to be held early in 2013.

Netanyahu has held consult meetings on Tuesday to determine whether to call for early elections. Consultations have been held all through the previous week, and Netanyahu has insinuated that negotiators were unable to agree on the Knesset budget, a reason he cited as sufficient enough to justify an earlier vote. (cont.)

My rav says to vote.  Although I do not follow him blindly, his logic is compelling:


"Vote.  You do not have to like it, but vote.  Hold your nose, if you have to, but you must vote in order to prevent another leftist or Arab from taking even one more seat in the K'nesseth."

My friend Ariel at The Torah Revolution likes to remind me that when I vote, I am validating and giving power to the (non-Jewish and not even democratic) democratic) system.

I must say that his reasoning is also compelling.  If no one voted, or if there were not any Jews voted, we might actually have something there.

I cannot tell you just how tempted I am to vote for an Arab Party, though. Maybe Jews will finally stop playing games, and wake up.

But, of course, my friend Eliyokim at Jews News is right to ask me, "Can I vote for anyone not connected with Torah?"

After all, the ONLY justification for Jews to control and reside in the Land of Israel is the Torah, NOT the United Nations (AKA: United Nothings), nor any other non- or anti-Jewish entity.

That goes for Tel-Aviv just as much as it goes for Hevron, Beth-El, or K'far Tapu'ah.

Since I simply cannot vote for those Jewish Home Party jokers (the resurrected National Religious Party), unless they get rid of "The Mustache Club" (Hershkowitz, Smolensky, & Orbach), Shaul "deMOCKracy" Yahalom, and Zevulun "I'm not budging! ...from K'nesset seat" Orlev.
But, if they don't, then what do I do?

Oh, and speaking of jokers, those Christian-lovers Ari and Jeremy are vying for spots on The Jewish Home Party list.  Thank God, they don't have a chance in hell, K'Einahora, poo, poo, poo...

I'll tell you why.  There's an Israeli political expression...
"There are those who would continue to vote for the National Religious Party, even if it had a cat on the list." 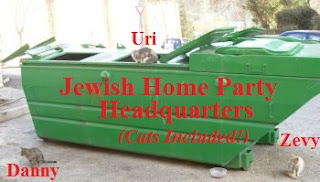 To understand this expression fully, you must first understand that in Israel, there maybe rats running around the streets in the sewers, carrying, God only knows what kind of, diseases.  But, it is the cat population which is the more visible, having chased the rats underground, becoming their own special category of vermin.

But, still some Israelis hat cats as pets.  So, every time you see a cat on the street, you have to ask yourself, "Is this cute little kitty someone's pet?  Or just more vermin?"

Believe me.  I ask myself that question about the Jewish Home Party/National Religious Party [NRP] ALL the time.

Well, I'll keep you updated on my grand decision.

Who knows?  Maybe Naftali Bennet will win the NRP leadership, and clean house.

Maybe Prime Minister Netanyahu will grow a pair, and tell the U. S.., the U. N., and everyone else that we are cancelling the Oslo Death Accords annexing Yehudah and the Shomron.(Judea & Samaria), and changing the course of history.

Yeah, and maybe monkeys will fly out of my...  Never mind.
Posted by Esser Agaroth at 12:38 PM