IsraelNN.com: Obama, the Interpreter of the Message of Passover

Passover recalls the bondage and suffering of Jews in Egypt and the miracle of the Exodus, but U.S. President Barack Obama says its message is reflected in Muslim uprisings. 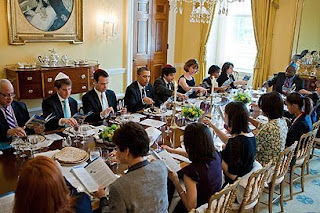 In his annual message, prior to his third straight participation in the Passover Seder, President Obama stated, “The story of Passover…instructs each generation to remember its past, while appreciating the beauty of freedom and the responsibility it entails. This year that ancient instruction is reflected in the daily headlines as we see modern stories of social transformation and liberation unfolding in the Middle East and North Africa.”

I understand the logic from a Western or an American/Globalist perspective. Yet, as a Jews, I find it disturbing that Obama makes a parallel between Divine intervention removing Am Yisra'el (The Jewish People) from slavery and spiritual oppression, with the activities of the Arabs who want to wipe Jews off the map. The rebels and dictators are united in this goal, if nothing else.

Having constructed a link between the Arab uprisings and Chosen People's experiencing the miracles of the Creator that led them out of Egypt and towards the receiving of the Ten Commandments, the President concluded, "As Jewish families gather for this joyous celebration of freedom, let us all be thankful for the gifts that have been bestowed upon us, and let us work to alleviate the suffering, poverty, injustice, and hunger of those who are not yet free.”

...towards the receiving of the Torah, not just the Asereth HaDibroth (10 Commandments), and on our way to the eventual goal of taking possession of Eretz Yisra'el (Land of Israel) which The Almighty took away from the K'na'anim (Canaanites), and promised to us. Obama demonstrates a rejection of this through his daily speeches and actions.

For good measure, he also added the Hebrew term “Chag Samayach,” which means “Have a happy holiday.”

President Obama chanced into a Seder during his presidential campaign in 2008, when the polls were not in his favor. At the end of the Seder, when Jews chanted, "Next year in Jerusalem,” Obama responded, “Next year in the White House.” (Read the entire article...)

I can see it all now. Just like some Hassidic Jews wait patiently for shirayim, symbolic portions of food handed to them at their Rebbe's Tish (rabbi's festive table), Obama's court Jews at the White House grovel for the leavings on their false Messiah's his plate.

I actually feel sorry for these Jews, having participated in a pseudo-Seder, probably their most Jewish experience of the year, eating treif (non-kosher) food, including hametz (leaven foods, forbidden on Pesah). Of course, who knows how many of these participants are actually Jewish, considering all of the years of intermarriage and pseudo-conversions infecting American Jewish communities, which produce non-Jewish children, and promulgate assimilation and pseudo-Jewish culture.

It is truly frustrating, not knowing what else I can do to prevent any further damage.

Only 20 percent of our ancestors made it out of Egypt. It is said that only 20 percent may make it out of our current exile of Rome (Esau/Edom). With so many Jews lost already, by not even having been born, and by so many Jews, who are lost spiritually, that they cannot even acknowledge that they are in exile, I am not terribly optimistic.

Perhaps one lost Jew will read this, and decide to search out what it really means to be Jewish.

One can only hope and pray, during this Pesah "Z'man Herutheinu" (the Time of our Freedom).