I Stand with David the Nahal Brigade IDF Soldier!

By now, you should all have heard about the IDF soldier removed from his unit, and put on trial, FOR DOING HIS JOB.

Here is a clip of the "incident," or rather, the mole hill, which has been made into a mountain.


Notice the watermark. Youth Against Settlements. I am not sure what they see in the video which is incriminating in the least. Judge for yourselves.

Did you hear about the online protest which ensued? Even the infamously, leftist, self-hating news daily Ma'ariv (nrg.co.il) believes that it has involved "thousands."


NRG (Ma'ariv Online): Huge Protest in the IDF: Thousands of soldiers on behalf of the soldier put on trial
Yochai Ofer, April 29, 2014

A Fighter in the Nahal Brigade was put on trial after his confrontation with Palestinians in Hevron, during which he cocked his gun. In response, a protest of thousands of soldiers representing every IDF unit, erupted on the Internet, expressing support for the soldier. The administrator of the website to which pictures have been sent: "The soldiers do not have tools to deal with rioters." (cont.)

Now here is just a small sample of the online protest. Photos were gathered from various sources, thanks to "Anonymous Facebook Friend." 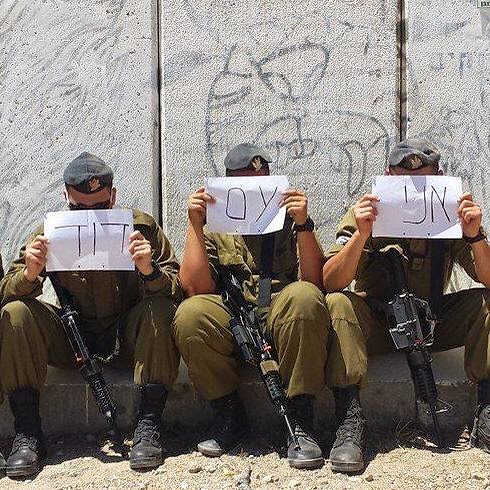 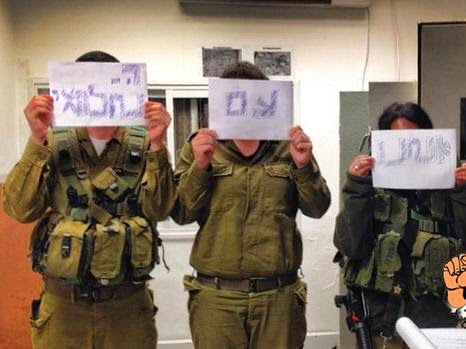 This just in: Former Defense Minister MK Shaul Mofaz (Kadima) adds his support for David HaNahalawi, and the actions he was forced to take. Say what you will about Mofaz. However, as former commander of the IDF, it is reasonable to assume that he has experience in such matters. Separated from MK Feiglin on the political spectrum he gains nothing for his dying almost dead Kadima Party alignment with Feiglin, albeit a weak one, on this issue.

Rabbi Sholom Dov Wolpe is awarding David a prize for his service, and will include cash. In Israel, he risks arrest and possible indictment for even thinking such a thing.


Esser Agaroth (2¢):
The diverse spectrum of Jews rallying behind David may be more important in that we are finally able to see [some of] the injustice of the Israeli government from similar, if not the same points of view.

This is the most dangerous threat to such as fragile system as the Erev Rav-controlled, Israeli Government, I can possibly think of.

Support for David HaNahalawi's Facebook page now has 129,000 Likes, and were achieved in only week!

The "Sheeple" are beginning to wake up. Let us pray that the momentum continues to increase, and that they do not succumb to government psychological tactics and threats, and choose to fall back asleep.

There are plenty of additional injustices being executed by the Israeli Government against its own constituents, and we will only see more.
Posted by Esser Agaroth at 12:48 AM

Very soon the Arabs of Israel will acknowledge that their own Qur'an teaches that God gave the Land of Israel to the Children of Israel. They will also be the first to recognize the Descendent of David soon to sit on the throne of his fathers. They will rally to the Restored Israelite Monarchy in the Land of Israel. Homework: "Cracking the Qur'an Code: God's Land, Torah and People Covenants with Israel in the Qur'an and Islamic Tradition" https://www.academia.edu/652627/Cracking_the_Quran_Code_Gods_Land_Torah_and_People_Covenants_with_Israel_in_the_Quran_and_Islamic_Tradition_-_2011_Second_Edition

That may or not be so.

But, we do not peseq halakhah according to speculation, nor even nevu'ah.

We poseq halakhah according to observable facts, and those facts are that Arabs are murderers of Jews, and are treated as a whole, and not individually in a milhemeth misswah.

The only exceptions are those who declare to their leaders that what they are doing to Israel is wrong. They are patur from punishment.

You have pass this time for promoting your book here.

You will be given the same pass again.