I have mixed feelings about posting this comic here, which was supposedly inspired by last week's Torah portion, and compares it to a famous scene from Star Wars film franchise. Do I really want to give the author the free publicity? Furthermore, someone will probably even want to sue me for giving him the free publicity. (Let him try.)


I Am Your Brother – Parshat Vayigash
Asher Schwartz, The [Non-]Jewish Press, December 18th, 2015 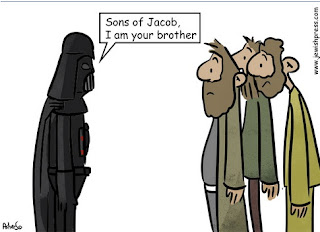 Esser Agaroth (2¢):
I do not think this is in the least bit funny. It is just your typical assimilationist humor, one of the many consequences of almost two millennia in galuth (exile).

Comparing Yosef HaTzadiq to a villain? Suggesting that the revealing of Darth Vader's relationship to Luke Skywalker is the same or similar as the revealing of Yosef's true identity to his brothers?

This is what I find offensive.
Posted by Esser Agaroth at 9:23 AM

I am sorry you find my cartoon offensive. I had no intention of comparing Yosef to an evil villain, only paralleling between two similar-but-different famous scenarios, in a light and humorous manner. .

I am simply suggesting that regardless of your intentions, the result was quite different, at least in the eyes of some of us.

As one commenter points out...

"Not just a villain, but a really evil psychopath who personally killed children and ordered the murder of what we assume to be billions of lives.

Just something for you to take under consideration in the future. I think everyone gets the parallel of the revealing of previously hidden family relations. But, maybe you do not see that impact of the content embedded within the comparison.