Abe Foxman vs. Donald Trump: It's A No Brainer

Times Of Israel: Ex-ADL chief: Trump’s ‘raise your hand’ gambit was deliberate, Nazi-style ‘fascist gesture’
Abe Foxman calls episode ‘about as offensive, obnoxious and disgusting as anything I thought I would ever witness in the United States of America’; says Republican candidate knew exactly what he was doing 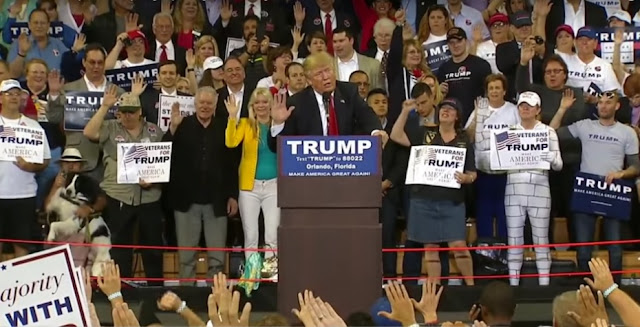 WASHINGTON — Former Anti-Defamation League director Abe Foxman excoriated Donald Trump for urging his supporters at a weekend rally to raise their right hands and promise to support him, a gambit Foxman said evoked echoes of Hitler salutes from Nazi rallies in the 1930s and ’40s.

“Let’s do a pledge. Who likes me in this room?” the Republican presidential candidate asked a large crowd Saturday in Orlando, Florida. “Raise your right hand: ‘I do solemnly swear that I — no matter how I feel, no matter what the conditions, if there’s hurricanes or whatever — will vote, on or before the 12th for Donald J. Trump for president.'” (Trump misstated the date of the Florida primary, which will be held on March 15.)

As the audience enthusiastically complied with his request, the candidate told them: “Don’t forget you all raised your hands. You swore. Bad things happen if you don’t live up to what you just did.”

For Foxman, who was born in Poland in 1940 and was saved from the Nazis by his Catholic nanny, watching Trump whip up his supporters in this fashion was extremely disturbing.

“As a Jew who survived the Holocaust, to see an audience of thousands of people raising their hands in what looks like the ‘Heil Hitler’ salute is about as offensive, obnoxious and disgusting as anything I thought I would ever witness in the United States of America,” he told The Times of Israel.

“We’ve seen this sort of thing at rallies of neo-Nazis. We’ve seen it at rallies of white supremacists. But to see it at a rally for a legitimate candidate for the presidency of the United States is outrageous.” (cont.)

Esser Agaroth (2¢):
Abe Foxman must be delusional. The gesture pictured above does not appear to be any different than that of the hand raising done everyday in court, when a witness is being sworn to provide truthful testimony, thus Donald Trump's chose of words, "I do solemnly swear..."

In another photo, some of those attending the rally did have their hands stretched out a little in front of them, but so what?


And now, invoking the Holocaust, to push a personal, political agenda?

Whatever you think of Donald Trump, Foxman is the one who is wrong here.

My eyes hurt from rolling them so much every time Foxman rears his ugly head. Why can't he just go away already?! He is the one who is offensive, and he most certainly does not represent me.
Posted by Esser Agaroth at 7:38 PM