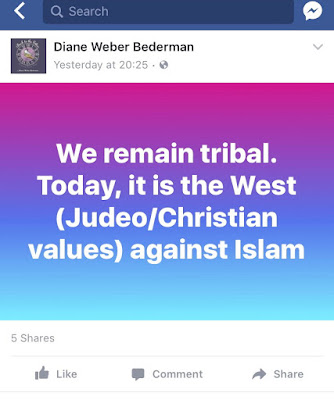 It is CIVILIZATION against BARBARISM.

Three [types] are the deniers of the Torah: ... And the one who says that the Creator replaced this commandment with a different commandment, and that this Torah was already nullified, even though it was from The Almighty, such as the Christians and the descendants of Hagar. Each of these three denies the Torah. (Mishneh Torah, Laws of Repentance 3:17)


Esau (the West - Malbi"m) are not our friends.

There isn't any quantitative difference in the threats/dangers between Esau and Yishmael (Arabs/Muslims), only qualitative. Esau's weapons and strategies (eg. smiles, money, lying, tricks) are simply different than those of Yishmael's. Esau's descendants are not our friends.

The Kiss of Esau

Do not forget that one of the eventual goals of Esau is to take the Land of Israel which it believes is rightfully his (theirs). The Vatican is acquiring parts, as are the Greek and Russian Orthodox churches.

The Evangelicals, as well as those who have "evolved" beyond that have been sneaking into Israel left and right, with the goal of staying, attempting to blend in with "settler" appearing clothing, and by "volunteering" to work the Land.

There are even those of Esau's descendants who have invented a recent movement, fake Israelites (Christians calling themselves "Ephraimites"), as a way of getting a foothold on our Land.

These group all desperately attempt to separate themselves from the Vatican and the Orthodox. Even though they all worship the same false deity, and hold the same Christian mythological texts as divine. And they all have countless "right-wing, religious" Jews fooled, Jews who have been blinded by their co-dependent need receive love and existential validation from the outside.

The progressives want Israel too. In their case, they want Israel to be part of the secular, global community of humans, absent of nationalistic ties. But that's another story for another time.

The using of the phrase Judeo-Christian values is just another one of Esau's strategies to latch onto Ya'aqov (Israel).

However, the phrase also feeds the Jews' co-dependence desperate need for acceptance by the non-Jews, and a sense of belonging among them.

I remember there was a time when this called nothing less than assimilation.  So, the fact that most of these Jews cover their heads all of a sudden makes this acceptable? These Jews believe that they can "handle" the Christian theology thrown in their faces, because their emunah (faith) is so strong?

Christian missionizing is not the [only] issue.

They want our Land. And its Jews, knowingly or unknowingly, who are helping them to gain a foothold in Eretz Yisr'ael., counter to the halakha (Torah Law).

Posted by Esser Agaroth at 5:04 PM