They Slaughter Our Children!

Set aside for a moment that "Nablus" is bastardization of the Roman, replacement name for Shchem (Napolis/Neopolis), and that "Palestinian" is a bastardization of the Roman desire to diminish the Jewish connection to the Land by renaming it Philistia, even though Philistia was where Gaza is now. Set aside the Arabs lies for now, and examine the words under the headline: "Large forces deployed near Nablus to prevent settler-Palestinian clashes."

Who exactly is the IDF supposed to be protecting? Jews or Arabs? As Israeli citizens, where do you want your taxes to go? The Arabs have an army "police force," and certainly have plenty of guns, thanks to the Israeli Left! Let them protect themselves!

The Children Were Slaughtered! 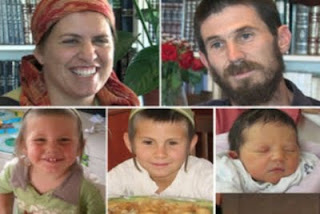 This has happened before, and it will happen again, I am sorry to say. That is because the Israeli government, and its army, continue to be more concerned with it image in the eyes of the West, instead of in the eyes of HaQadosh Barukh Hu (The Holy One, Blessed Be He).

Its lame excuse for a Minister of Defense bows to the demands of goyim and leftist "Jews," by easing security restrictions on the Arabs. Then when terror strikes, it wastes time playing the "blame game."

It cares more about what American and European Leftists think of us, than what we in Israel think of ourselves.

It is criticized by the Leftists, calling themselves Jews, for not bowing to the West low enough. These Leftists cheer the slaughter of settler children, crying that they had it coming!

It looks to the United Nations for validation of Israel's existence and self-worth, instead of standing on its on two feet, and saying "We don't need your validation!"

Instead of doing what need to be done, in order to solve the Arab terrorism problem once and for all, it waits around for Jews to be slaughtered, in order to use the incidents to gain sympathy with the international community.

The Israeli government continues to repeat the same mistakes over again, and expect different results.

It is ready to sacrifice its citizens, religious settlers in particular. It wants to break them. It wants to indoctrinate them into secular, Israeli society. It wants to control them, and force them to accept the State instead of their Almighty God.

...and it will continue to sacrifice Jewish children to these ends.

A Jewish State and government would behave like one, and fight back!
Posted by Esser Agaroth at 11:04 AM

B"H - Good piece Ya'aqov. I also notice a slight change in your attitude towards this goy-created State. The more Jews would arrive to this conclusion the better it'd be I think. But there is a psychological investment that every one of us here on the Land made at one point or another in our lives that fights this: you have to have real faith in Hashem in order to let that in the State go.