Nachas! A Former Student Of Mine Declares Intention To Refuse Anti-Torah IDF Orders

24 of the Twelfth Month (Beth) 5771
I wish I could take credit for the actions of this former student of the yeshiva high school where I used to teach. But, I cannot. Before he came to us, he already had several positive, influential people in his life.
Translated from HaKol HeYehudi (The Jewish Voice): 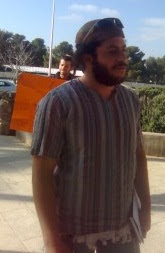 Protest On Ammunition Hill: "Our Rabin Is Not A Traitor"

Aharon Rabin, resident of Jerusalem, was supposed to enlist in the Israeli Defense Forces [IDF] today. Rabin, who has explained a number of times that he would refuse any orders to expel Jews from their homes, and will behave according to guidance from the book Torat HaMelech, arrived together with friends who waved signs, and called, "Our Rabin Is Not A Traitor." In the end, the IDF refused to enlist Rabin.

The truth is that the IDF does not want young men like Rabin in its army. They are not to be duped into carrying out anti-Torah orders, and like the Haredim (whom the IDF also does not want), they will expect strict kashruth and shabbath observance. Shabbath will only be broken for life-saving measures or matters truly involved with the guarding of Israel's borders.
If young men like Rabin were to be enlisted into the IDF, dependence on the State to determine Torah observance would be under scrutiny. The IDF Chief Rabbinate which stood by while almost 10,000 Jews were thrown out of their homes, and their land handed over to enemies of the Jewish People, would not be considered the ultimate authority on matters of halakha (Jewish Law). Rather, Gedolei HaDor and other Hakhamim would be consulted.
The numbers of soldiers expecting time for prayer three times per day would increase dramatically. More and more, secular kids from Tel-Aviv and Haifa would be asking about the origins of tzitzith and tefillin, and asking to try them on.
Young men like Rabin would encourage fellow soldiers to follow in refraining from carrying out any anti-Torah orders. Haredim would surely follow, and even a few mamlakhtim (undying state-loyalists) would be thrown into a state of cognitive dissonance, unable to defend the position of the IDF on such matters with halakhic sources, since they have always been told that obeying IDF orders, no matter what, IS the halakha.
In a word, young, Torah-observant men like Rabin are considered "dangerous," for they might actually have an influence on the other soldiers, encouraging them to beewish soldiers, and not simply Israeli ones.
Aharon Rabin is the antithesis of the other Rabin.
Our Rabin is not a traitor.
Posted by Esser Agaroth at 10:09 PM

Kol Hakavod to this heroic young man. May he be an inspiration to other Jews, across the spectrum.
The tragedy is that young men such as these would make excellent true Jewish soldiers. Pity, but one fights milchemet mitzvah in so many ways.

I'm glad you bought this up Ya'aqov, as in my view it is only one of the many symptoms in front of our eyes that should make even the blind see that the so called Jewish State is anything but Jewish. Of course, rational [State-worshiping] people have a vested interest in continuing living in denial, in not wanting to see the obvious: After all, without a State, not believing in Hashem, they think they are vulnerable nothings. And, again of course, they are right. See http://thetorahrevolution.blogspot.com/2011/03/re-1-mamlachti-statist.html and following comments on http://www.ynetnews.com/articles/0,7340,L-4049364,00.html

Thank you for your comments!