The following are my comments on a report I heard that Al-Qaeda has rebuked Hamas for the Fogel Family hy"d murders. I, myself, have yet to see this report. I am waiting on a link. Nonetheless, my comments still stand, the report being true or not...

The rule of thumb is that one cannot trust the words of any enemy of the Jewish people. The Yishma'elim (Arabs/Muslims) have always been liars, rapist, marauders, pillagers, you name it. Just read the Tana"kh. The Talumd, and other sources from that time, elaborates further. Talking to them has simply been "repeating the same mistakes over again, expecting different results."

The liberal West doesn't believe in accepting and understanding Arab culture like I do. The liberal West in Europe and the elite in the U. S. believe very strongly that Western culture is superior, and that the Arabs will eventually come to see and embrace that.

The reality is that the Arabs know this, since at least the '60's, probably earlier, and have learned to lie like Esau, the West, lies, with a smile on their faces. The West has been in complete denial about this, unable to accept that maybe, just maybe, liberal, Western culture is not the ultimate culture to strive for, in its goal for world, cultural domination. The words of Arabic translators seem to have fallen on deaf ears, proclaiming that Arafat has always said different things in English than in Arabic.

Even U. S. President Bush, with all of his flaws, proclaimed the need for more Arabic speakers in the Intelligence community.

No. the West insists on talking, but in reality, it wants to conquer the world, like the Arabs do, but in a different way, with words. The [Christian] Dominionists (Sarah Pallin, etc.) are much more willing to use force, on top of their sneakiness with words. They HAVE been paying attention to the Arabic translators.

So, what's my point?

It's all a rouse.

True, there is a lot more fighting amongst various Arab groups, which is starting to come out more and more. Yet, if there is any truth to the above report, then the correct translation would be:

"You killed the wrong Jews at the wrong time. You should have killed these other Jews over here, at such in such time. It would have been much more effective." 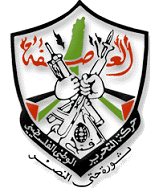 Al-Qaeada has always seemed to have a superior attitude when it comes to global Jihad, and have little tolerance for the insolence of "upstarts" like Hamas.

This can be the only reasonable explanation for the above report. Remember, the Arabs want to wipe Israel off the map. The symbol pictured left is the Fateh (Arafat, Abbas, etc.) emblem. Their aspirations include wiping Israel (in green) off the map, and creating a 24th Arab country wi 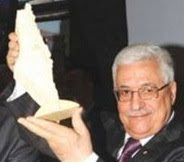 th the made up name of Palestine. Pictured right is Mahmoud Abbas ysh"w, holding a statuette, representing the same borders for his dream state.

They do not just want Yehudah & Shomron (Judea & Samaria) and Jerusalem. They want it all, save for the Golan, which they would give to Syria. These are the aspiration of all Yishma'elim, Fateh, Hamas, Islamic Brotherhood, Hizbullah, Al-Qaeada, Sunni, Wahabe, Shi'ah. Do not be fooled by names, categories, and in-fighting. In this they all stand united.

The second rule of thumb is not believe everything you read in Israeli news sources, right or left wing.

*********
The report I received turned out to be a supposed Hamas condemnation of an Al-Qaeda associated group for killing a Italian, pro-Palestinian activist.

Furthermore, these animals even kill those supporting them, this Italian activist, and the pro-Palestinian, leftist Jew the other week. His father was even an Arab.