In an apparent “price tag” attack, vandals spray-painted epithets on the outer walls of a Jerusalem church and damaged a car parked nearby overnight Thursday. 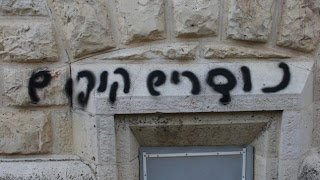 Photos released by the staff of Dormition Abbey, which is located just outside the Old City’s Zion Gate, showed graffiti which read “Christians are monkeys” and were signed “Havat Maon,” a West Bank outpost.

“Price tag” attacks are generally carried out by Jewish extremists against Palestinian property in retaliation for Israeli government decisions they perceive as being anti-settlers. The attacks aim to exact a “price” for government actions the extremists oppose, like the demolitions of outposts.

In a similar incident six months ago, vandals sprayed defamatory graffiti on the walls of a monastery on the capital’s Mount Zion.

A series of “price tag” attacks were carried out Wednesday morning in two Palestinian villages in the Jordan Valley, north of Jericho, and a number of neighborhoods in Jerusalem. The acts appeared to be retribution for the murder of Evyatar Borovsky, an Israeli stabbed to death by a Palestinian a month ago.
“We have lost control over the settlers in some cases,” Welfare Minister Meir Cohen of Yesh Atid said last Saturday, “We need to deal with the extremists in order to bring them back to normative behavior,” he added, responding to a recent wave of attacks.

Esser Agaroth (2¢):
Let's see. Where do I begin my criticism of this problematic report.

OK. I suppose I can start at the beginning.

I actually thought that the graffiti said "Christians are thorns," as opposed to "monkeys." It made total sense to me, given the Torah verse, this brought to mind:

Numbers 33:55
But if you will not drive out the inhabitants of the land from before you, then those that you let remain will be as stingers in your eyes, and as thorns in your sides, and they shall harass you in the land wherein ye dwell.

1. What does the Shabba"k think? That settler boys' handwriting is THAT bad??

And so, first off, I am still not convinced that such a formal group as Tag Mahir ("Price Tag") exists. It may very well have started with some random incidents, with the Shabba"k, Israeli secret police, known as he General Security Service, grabbing the opportunity to demonize the ideologically oriented settlers. (He who understands, will understand.)

Want to call me a conspiracy theorist? Go right ahead. But first, I recommend that you live in K'far Tapu'ah for five years, like I did. There, the joke is that there aren't any Shabba"k agents. There doesn't have to be, because...


a) There are plenty of people around, some State loyalists, some nut jobs, and some both, who are willing to do the Shabba"k's job for free, and...

b) The Shabba"k doesn't even half to infiltrate a town;they just have to make you think that they did.

Either way, one of the reasons we were, and are, to remove the "they" in the verse from the Land, is because "they" are ovdei avodah zarah (practiciners of foreign/forbidden worship). Neither should we allow them to have influence on us, nor should we allow them continued opportunities to pollute the Land with their filthy practices.

Deuteronomy 12
2 You shall surely destroy all the places, wherein the nations that you are to dispossess served their gods, upon the high mountains, and upon the hills, and under every leafy tree. 3 And you shall break down their altars, and dash in pieces their pillars, and burn their Asherim with fire; and you shall hew down the graven images of their gods (eg. Yoshke); and you shall destroy their name out of that place.

That's a lot of red bold, the detailed elaboration suggesting a fairly high level of importance to this misswah.

So, it appears to me, that although the culprits broke Israeli Law, they may have very well been on the way to the fulfillment of a misswath 'aseh (positive Torah commandment). Who knows? One can never tell about these things.

Of course, Esser Agaroth (2¢) would never encourage any acts of vandalism. (A-hem!)

However, when I constantly say (and no one appears to listen) that our ability as Jews in Israel to obey both the laws of the State of Israel and Torah Law is becoming near impossible, can you now finally see what I mean??

Sure, this Israeli Law is just preventing Jews from performing one misswath 'aseh?

What will be next? Forced violation of a negative misswah? There are already problems with overextended "heterim" (permits) for Shabbath violations. Any criticism of IDF "rabbinic" silence on issues such as soldier safety, promiscuity (A-hem!), and Land giveaways to hostile Yishma'elites appears to be a punishable crime in Israel.

3. At least according to on MK, battling avodah zarah is not "normative behavior." MK Meir Cohen is not so coincidentally from the same Yesh Atid party as the Minister of (Re-)Education, Rabbi Shai Piron. I wonder what Rabbi Piron thinks about avodah zarah?

4. What do YOU think of avodah zarah? Of accepting their bribes money financial support? Of handing land over to them? (...which is also forbidden according to the Torah: Deut. 7:2) Do you think that the Protestants and Evangelicals are any different that the Catholics? That's exactly what they will try to tell you, even though their theology is based on the same, original texts.

Monkeys or thorns, it's all the same: forbidden. Do you really want to touch it? Or would you rather discourage their polution of the Land.