These photos, screenshots from the Israeli President's Official YouTube Channel (source video below) show what is important to Shimon Peres: Goyim, in particular, his Illuminati pals. 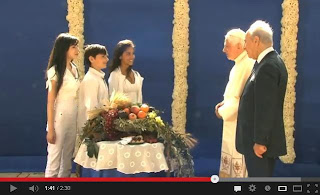 We are allowed to demonstrate the bringing of the Bikkurim (the first fruits) to the secular Israeli President, his buddy, a high priest of avodah zarah and a chieftain of Edom, and demonstrate it to the Israeli Prime Minister. But, we are forbidden by the above mentioned individuals from performing the misswah properly, by bringing them to Har HaBayith (the Temple Mount) on Shavu'oth, and presenting them to a proper priest, a Kohain.


And, speaking of pedophilia Pope-phillia, here is President Peres with the new high priest of avodah zarah and a chieftain of Edom.
President Peres was one of the first celebrities Heads of State to be received by the newly elected Pope Francis. President Peres presented what appeared to be a Tana"kh (a real Bible) in Hebrew,...as if all of the pieces of Israel thrown to the Vatican wasn't enough.

In return, Peres received some old coins, as if giving back the Temple vessels was too much to ask? Does the Israel President get to keep those coins, or do they go into a depository, which theoretically belongs to Israeli citizens? Hmm...

Sure, Queen Elizabeth II is no longer a "princess," but "queen" doen't start with the letter "p," does it?

Her Majesty does not appear to be terribly concerned that she is no longer welcome at the home of at least one resident (probably more) of K'far Tapu'ah, in the Shomron (Samaria).

President Peres receives, yet, another award, for something,...I suppose being the "symbol" of Israel.

And, what you have all been waiting for, President Peres's wrap, techno, house, dance mix video!


Seriously, though. Is this President Peres dude for real?

I guess he risen to such a high level (of gaivah), that either doesn't care, is careless, or just loves to throw it into all of our faces.

He does whatever he wants, and expects the rest of us to do the same,...what HE wants.
Posted by Esser Agaroth at 11:03 PM