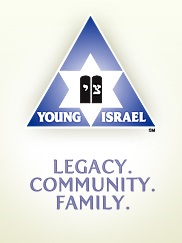 An advertisement popped upon Esser Agaroth, from a Young Israel community, encouraging Jewish families to visit, and even consider the possibility of becoming part of the community.

Before I do my usual, and often expected, bashing critique of something I do not like, let me first tell you about how I like and appreciate Young Israel.

When I first walked into my local Young Israel, after moving into the neighborhood, it was Erev Shabbath.

I was greeted by very friendly Jews, and after Qabbalath Shabbath and 'Aravith, with several meal invitations. It was almost as if they were fighting over me, in order to add to their misswah of hakhnasath orhim (entertaining guest). Of course, they were not fighting, nor in any kind of gaivadik competition. Everyone just wanted the new face attached to the new Jew in the neighborhood to feel welcome.

I immediately felt at home, and I was just as immediately put to work, davening minhah from the 'amud the next afternoon. By the following Shabbath, without any encouragement from myself, minhah was already considered "my job." Months later, I was honored with the leyning Ruth on Shavu'oth.

I was considered a member, before any monetary obligations were even discussed.

Needless to say, I have a great fondness for Young Israel.

Perhaps that is how schuls are supposed to operate. But, we all know that it does not always work out this way.

I have also been impressed by the Council of Young Israel's willingness to take politically-incorrect stances, in support of Israel, and in support of Jewish towns in Yehudah and the Shomron (Judea and Samaria). Perhaps I should not have to be impressed; perhaps I should expect any Torah-based organization to take such public stances. Nonetheless, I would like to point out there is at least one such organization which does not shy away from confronting controversial issues, unlike its countless galuth (exile) oriented counter parts, both on the proverbial left right.

Young Israel rabbis in Israel have also put themselves and their careers on the line, for the sake of their principles.

Rabbi Shalom Gold, founder of Young Israel of Har Nof (Jerusalem), has taken some very principled stances regarding when IDF soldiers should refuse orders, not to mention his attempts to wake Jews up regarding the dangers of blindly accepting support from Christians, claiming to be our "friends."

Rabbi Nachman Kahana, of "Hazon Yehezqel," Young Israel of the Old City of Jerusalem, is on the front lines,...literally. His Young Israel is not just in the Old City, but actually in the in Moslem Quarter.

This brings me back to that ad I mentioned which popped up on this site's YidSense ads space.

No, I do not want to hear any of this nonsense about living in Israel not being a misswah, nor about needing to wait around for Mashi'ah, beforehand.

If you are going to ask that Jews come visit, and consider the possibility of joining a community, then encourage them to be a part of building up the Jewish communities in Israel. If fact, why doesn't the community behind the advertising campaign start the process of transporting its entire population to the town of its choice in Israel? Better still, how about founding a brand new town in Israel?

No, it is not some silly pipe dream. The natural and proper environment for Jews in within Eretz Yisra'el.

New York, New Jersey, California, and Florida only have strong Jewish communities bedi'avad, an artifact of Jewish inginuity, even while in galuth (exile), and it IS exile. We are not supposed to be comfortable in exile! We are not simply supposed to pine after a life in Israel. Now that The Almighty has made it possible for us to make our lives in Israel, we no longer need to be satisfied with just pining. We have been granted the opportunity to make it happen, and to part of the process of rebuilding the Land, not matter how difficult that still might appear to be. The door to life in the only true Homeland of the Jewish People has been unlocked. Let us return to it, continue building, and make it even easier for then next Jews to settle here.

The Land is no longer barren, but once again in bloom. But, will it still be without you to be on hand to show your personal care for it?

With the threat of the Yishma'elite enemies surrounding us, increasing day by day, with their countries succumbing one by one to Islamic fundamentalist regimes, NOW is not the time to sit back and relax, and write out a check; it is the time to bring your body, and the bodies of your children, and your passion for Torah and a Jewish life in the Jewish Homeland.

Young Israel has merit for the support it provides to its sister schuls in Israel. There are many, all over Israel!

Get on the plane, and make an even more powerful difference, by actually making homes and building your communities you have always supported financially.

Below is a list of these communities. Just pick one. Be a part of it temporarily while you get settled and find the path to the permanent community of your choice.

Right on! As a relatively new oleh (almost 2 years), I can say with 1,000,000% certainty that there's no place better to live as a Jew than this beautiful land that Hashem gave us.

On another note, I loved your broken records!

Thanks, everybody, for your comments!