Well, there you have it, ladies and gentleman, our brand spanking new, deMOCKratically elected Chief Rabbis, as if democracy had anything to
Here's what some of our Israeli "leaders" have to say about it. There is so much to comment on, that I have interspersed my comments within the below reports in blue italics.


Arutz 7: Rabbi Ben Dahan: Disappointed with Results
Deputy Religions Minister says he hopes the secular public will not “give a kick to the institution of the Rabbinate.”

Deputy Religions Minister, Rabbi Eliyahu Ben Dahan, voiced his disappointment with the failure of religious Zionist candidates to be elected to the posts of chief rabbis Wednesday. Rabbi Ben Dahan is a member of the religious Zionist party, Bayit Yehudi.

"As a member of the Bayit Yehudi I am certainly disappointed that we failed in the mission to at least have one rabbi from the religious Zionist camp elected,” he said. “We put in the maximal effort possible but regrettably, it failed."

So, since your candidate did not win, so we should not listen to him?? What happened to your precious democracy, or in this case, deMOCKracy? Haven't the representatives of the people spoken?

For the record, I happen to like Rabbi Ben-Dahan. I am, however, disappointed that he involves himself in such politics. Either the Torah is correct, or it is not. Either the one representing the Torah ideal should win or not.

Of all MK's, I would have expected Rabbi Ben-Dahan to call for the implementation of a"real" Chief Rabbinate. (More on what that is below.) Or in the worst case scenario, to support a candidate who would speak Torah, and follow Torah, and encourage others to do the same, no matter how many toes he ended up stepping on,...and no matter how many State laws he violated.

“I regret that the campaign of harsh mudslinging against Rabbi David Stav – Chairman of the Tzohar Rabbis, who has indisputably shown wonderful public Torah work – came from within religious Zionism itself,” she accused.

I wrote to MK Hotovely, informing her that there are at least Two Religious Zionist Camps: Real Religious Zionists and Mamlakhtim (undying State loyalists). then I asked her who she thought Rabbi David Stav was. I have yet to receive a response from her or her staff. She is right about one thing. Some of the mudslinging did come from Religious Zionists.

“The elections for the Chief Rabbinate are over. The institute that was irrelevant before many Israelis were born or formed their worldviews will remain so for the next ten years,” he wrote.

“Whoever wants to use the Rabbinate’s services – that is, of course, his right,” Lapid continued. “But it cannot be that they will have no alternative.”

He concluded with a commitment to continue his struggle for civil marriage and for making the Reform movement equivalent to orthodox Judaism in terms of state support.

“It will be a dirty political battle, and maybe a long one, but we will fight for this like Yesh Atid fights for everything: without giving up, without taking our eyes off the goal, until it happens,” he declared.
The only good thing about the Chief Rabbinate is that it's giving us lots to write about! (If we so choose.)

"Political battle"
Translation: Not a Torah battle, but rather a battle against the Torah!

The fundamental flaw in thinking of most MK's is this notion that Western values and sensibilities acquired in galuth (exile), such as pluralism, have anything in the least to do with the structure of a Jewish institution. The fundamental flaw in the thinking of Jews living in Israel is that the K'nesseth is in the least bit interested in creating an authentically Jewish country (...government, military, rabbinate, etc.)

The final goal of the Lapids and Pereses and Beilins is to have a fully assimilated, Western State, accepted by the goyim, if not a full member of the European Union. Prime Minster Netanyahu stands out from the crowd, in that he sprinkles kosher salt on the State, as if to make it kosher, yet ends up rubbing it into the People's wounds.

And, speaking of complete assimilation, one MK really hammers this home with her insistence, above and beyond that of Lapid's, that pluralism is supposed to have some kind of connection to Judaism and a Jewish identity....

Esser Agaroth (2¢):
Well, MK Gal-On's comments are self-explanatory. So, I will just move on to the conclusion.

The Chief Rabbinate is highly problematic, to say the least, yet for reasons, not even Rabbi MK Ben-Dahan touched upon (that I am aware of).

Since when have Chief Rabbis made public, and necessary, unpopular rulings on halakhah (Jewish Law)?

Did Chief Rabbis tell the Israeli Government that it is forbidden to give away Jewish Land to hostile Yishma'eli enemies (ie. mesrirah)?

Did Chief Rabbis at least warn the Israeli Defense Forces [IDF] leadership of the possibility of increased promiscuity, due to the"integration" of women into predominantly male units?

Has there been a Chief Rabbi in recent history to admonish the IDF for putting Jewish soldiers at risk, for the sake of "innocent civilians," especially those who have turned out to be collaborators with our enemies? In fact, has a Chief Rabbi ever instructed the State's generals in anything related to Hilkhoth Milhamoth, the Torah Laws related to conducting a war, or even the defense of Israel's borders?

Has a Chief Rabbi in recent memory EVER criticized its boss, the Israeli Government?

Hasn't anyone in Israel, perhaps with an MBA or PhD, ever heard the term "a conflict of interest?"

This brings us to last week's Paratshath Shofetim.

Judges and officers you shall appoint for yourselves in all of your gates, which the Lord your God has given to you, tribe by tribe; and they shall judge the people with righteous judgment. You shall not wrest judgment; you shall not show respect to [some] people [over] others; neither shall you take a gift; for a gift blinds the eyes of the wise, and perverts the words of the righteous. (Deuteronomy 16:18-19)

Does the Rabbinate have any real power to judge, as it is stated in the Torah? Their authority over marriage, divorce, burial, and kashruth is being swiftly eroded away, which should be a welcome comfort to MK's Lapid and Gal-On, among many others.

I cannot say anything against Rabbi Yitzhaq Yosef or Rabbi David Lau. My criticism is of the institution of the Chief Rabbinate itself, founded on the remains of the liaison to the Ottoman Empire, with some meddling by the British Mandate thrown in for good measure. I am afraid that the Chief Rabbinate simply does not cut it as an authentically Jewish institution, if for none other reason, then for its complete inability to act independently.

Does the Talmud hint of what we are experiencing already?

Babylonian Talmud, Sanhedrin 97a
It was taught, Rabbi Yehudah said: In the generation when the son of David comes, the house of assembly will be for harlots, the Galilee will be in ruins, Gablan will lie desolate, the residents from the border towns will wander about from city to city, receiving no comfort (hospitality), the wisdom of scribes will be in disfavor, God-fearing men will be despised, people will be dog-faced, and the truth will be absent, as it is said, "And the truth is absent, and he who withdraws from evil makes himself prey." (Isaiah 59:15)

Those who appear to support the institution of the Chief Rabbinate either hang on tight to the idea that we must wait around for Mashi'ah to fix everything, or do not really want a Chief Rabbinate after all, but rather puppets.

Just how long are Israeli citizens going to buy the illusion? Just how long will it take for us to stand up and say, "Hey! Who's behind the curtain?" (alla "The Wizard Of Oz") 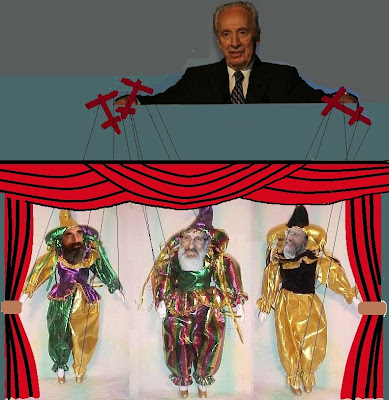 As in all battles against HaShem and His Torah (ie. Korach, Bil'am, Haman, etc.), Lapid's and Gal-On's (and Peres's) will backfire Sure, maybe the government will manage to eliminate the Chief Rabbinate. But, I doubt that he will like what he will eventually get as its replacement, assuming he will even be around to see it...

The Sanhedrin.
Posted by Esser Agaroth at 12:03 AM

It seems neither the religious or secular cares about what the chief Rabbinate has to say. Finally something we can agree on!