Who Needs Arab Nationalists when We've got the Peres Peace Center?

The Peres Center for Peace decided not to include the play "Snow Ball" in its program for the visit of the Barcelona soccer team in Israel, because the play includes the line that "the state of Israel is the national home of all Jews.,,,"

...Initially, the Peres Center was very enthusiastic about the initiative. They sent staff members to watch the play and indicated that they were favorably impressed.

But much to the theater's surprise, the Peres Center ultimately nixed the play, via a letter written by Dvir Zivan, the manager of the Peres Center's Sports department. The email, which has been obtained by Israel Hayom, says that "we would be happy to bring all the Jewish children to the play, but there is a problem. We do not do activities intended for one nationality only. It is hard for us to bring Palestinian children to a play that uses the words 'Jewish state.' Unfortunately, we will be unable to cooperate on this venture."

"Snow Ball" director Roy Horovitz said in response that "the refusal of the Peres Peace Center to include the play in its program for the visit of FC Barcelona caused us great disappointment. What is particularly outrageous is the argument they gave. It's sad to discover that in a center that carries the name of the president of the state of Israel, there are those who believe that identifying Israel as the Jewish state is a problematic statement that is not part of the consensus."

"We saw the play during Passover 2013," read a statement issued by the Peres Center. "At the time, it had nothing to do with the visit by FC Barcelona. We try to display sensitivity in everything connected to presenting material to mixed audiences, and the purpose of the project is to find common denominators and not to emphasize differences. It was decided not to present the play because we feared that its content, as good as it is, would not be suited to all the participants. There is no connection between this and FC Barcelona's visit."

Esser Agaroth (2¢):
Periodically, Jews would bring up the possibility that the Arabs, with their un-Jewish, traitorous allies, could  eventually gain a majority in the K'nesseth. At this juncture, they could and would vote to erase the [currently theoretical] Jewish nature of the State. Their list of actions would include All the while the Jewish "sheeple" would stand by, allow it to happen, and allow themselves to be led to [back] to exile, servitude, or slaughter, all in the name of democracy, as if that had anything whatsoever to do with the operations of a Jewish country.

But, we no longer have to wait with baited breath to find out if such a scenario would ever come to fruition!

We longer have to depend on hostile, Arab nationalists to force us to commit suicide for the sake of Western (ie. un-Jewish) values and sensibilities!

We have the Peres Peace Center (Read: Peres Piece Center, or Peres Palestinian Center) to do it for us instead!

The Yishma'elim (Arabs) may settle for what ever they can get their hands on for now. Then they will continue to blow up, shoot, and stab more Jews, in order to get the borders proposed back in1947 (left), which they had a tantrum about and rejected. But, they will not stop until they wipe Israel off the map, and take it all (below right).


What does the Peres Piece Center want?

Well, from here, it looks like it wants very much the same.

First, it seems like a two-state solution, would foot the bill for them. But, one of those states would be Arab, and the other one, would be,...multi-national? In other words, a [potentially] Jewish state would no longer exist.

Pretty sneaky, huh? And all done right under our noses.

But, can any of this truly be traced back to the President (of what?) himself?

Sure, this Peres Piece Center carries his name, but so what?

Right under our noses, and right in our faces! How do you like the clever sneakiness of that?! 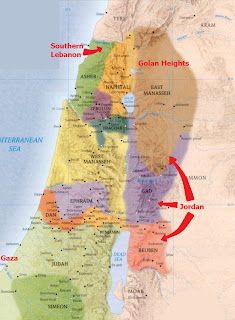 THIS is "Greater Eretz Yisra'el."

And, with OR without your help (most likely without), I have faith that we will merit receiving it.
Posted by Esser Agaroth at 11:39 PM