The President of Israel, Shimon Peres, wants YOU to ask him questions on Facebook!

Those questions submitted, receiving the most likes will actually be answered by the President!

Gee! Do you think that mine have any chance of being "liked" by those following the President's website?? 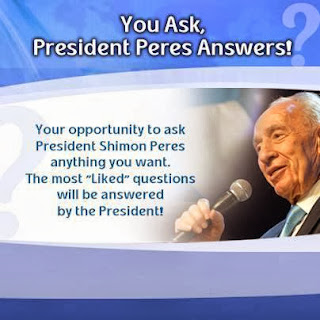 1) In your own words, the guns you and Rabin gave to the Palestinian Authority did not kill Jews. If this is true, then which guns DID kill Jews during the Oslo War? How did they get there? Smuggling?? Whose fault was it, that the smuggling wasn't stopped?

2) Who is responsible for the death of the Jews on the Altalena?


a) Rabin, who gave the order to shoot?
b) Ben-Gurion, who fave Rabin the orders?
c) They had it coming?


3) What did you mean when you said that "Israel no longer needs borders?"

4) You recently condemned Yigal Amir yb"b for violating a great misswah, and that for this he should never be forgiven:

What are your thoughts on Shabbath, also one of the Ten Commandments? (Tip Credit: Life In Israel) What about giving Land away to our enemies, cutting secret deals, which go against your own precious "deMOCKracy," not mention making secret and not so secret deals with the Vatican, Palace of avodah zarah, another one of the Ten Commandments, to give away yet more Land? Should those desecrations also never be forgiven?

5) Who orchestrated the kidnapping of Yemenite children 60 years ago? How did many of them later show up adopted into American Jewish homes?

6) Did the technicians who irradiated countless Sepharadi children really believe that they were using an experimental treatment for ringworm? Or were they just lied to?

7) Why are the living standards for Ethiopian Jewish (the real Jewish ones) immigrants significantly lower that than those of Ukrainian immigrants, most of who are goyim?

8) What was the real reason behind former Interior Minister Avraham Poraz's freeze on immigration from Peru and India? Was it because most immigrants from Peru and India are religious, live in Yehudah and Shomron (Judea and Samaria), and don't vote the "correct" way?

9) Who gave the order to deliver Jonathan Pollard to the FBI?


10) Who Killed Yitzhaq Rabin? In other words, who was really behind bumping him off?After two guns shots, he walked to his car. Yet, his autopsy report says his cause of death was from a third gun shot wound. The discrepancies between the Israeli Government's official report and the evidence are too numerous to list here.

I await the President's responses with baited breath.
Posted by Esser Agaroth at 2:10 PM