You may remember Dr. Mordechai Keidar from his exciting debates on Al-Jazeera, in which he displays his command of the Arabic language and culture. He also wears a kippah, but you might not have guessed this from his photo.

I must admit that I do not recall Dr. Keidar's approach, in his appearances on Al-Jazeera, whether he argues using [Western] logic, for which the Arabs care little, or applies a Torah approach (ie. Israel belongs to us, the Jewish People. Deal with it!).

Since I do not recall any Jew on Al-Jazeera applying a Torah approach, I will hazard a guess that Dr. Keidar employs the same [Western] logic, as I saw him use in a panel presentation with Caroline Glick and Yoram Ettinger at the OU-Israel Center, in the summer, 2011, just as he does below.


Arutz 7 Op-Ed: What is Going to Become of Gaza?
Pipe-dreams that have no connection with reality are not going to come true.

What is going to happen in Gaza?

The question worrying everyone who has an interest in Israel's security is how Operation Protective Edge will end and what the near and distant future of Gaza will be. The media are filled with Israeli and foreign speakers who know what should happen to Gaza, each according to his own mindset. In this article we will attempt to evaluate the predictions according to the way Hamas sees things. Let us enumerate some of them:

*EA: I have only listed the headings here. In a manner of speaking, these are the "myths" he proceeds to debunk. I have included his conclusions below, in full. The complete piece is lengthy, but very informative.


1.Hamas will need outside help on a massive scale to rebuild its ruins.

2. Gaza must be demilitarized

3. Hamas will have to change for the sake of the Gazan civilian population

4. Gazans will rebel against Hamas rule

5. Hamas' demand to lift the sea blockade is sensible and justified

...Worst of all, Israel has several organizations, most of them funded by the New Israel Fund (AKA New Israel Death Fund), that used legal and public measures to make it easier for Hamas to prepare its military infrastructure.

6. We must bring the PA to Gaza to replace Hamas' rule.

7. The "secure passage" from Gaza to Judea and Samaria must be opened.

Three main conclusions can be reached from the above:

The first is that we must not reach any agreement with Gaza. What can bring quiet to Gaza is only fear based on the sure knowledge that any provocation – and it doesn't matter which organization does that provocation – will be answered with a non-proportionate response. The idea of removing the sea blockade should not even be broached and certainly not the thought of an airport. Israel can continue to sell Gaza food, water, medicines, gasoline and electricity to prevent a humanitarian tragedy there.

The second is that it is important to start moving towards the only solution that can result in security, stability and quiet in Judea and Samaria, and it is establishing seven Emirates for the "hamulot" (family tribes) living in the Arab cities of Ramallah, Jericho, Kalkilya, Tul-Karem, Shechem (Nablus), Jenin and Arab Hevron. Israel must remain in the village areas while offering Israeli citizenship to the residents of those villages. The program is described in full here.

Under no circumstances can Israel allow another Palestinian state in Judea and Samaria, as within a short time it will become a Hamastan. Israel and the world must take apart the PA and on its ruins establish the 8 Emirates, which include Gaza - which can stay under Hamas rule, just as long as it is deterred from hostile actions against Israel.

The third is that Israel and the world must understand that in the Middle East one only achieves peace through victory. He who manages to convince his neighbors to leave him alone for their own good can enjoy tranquillity. There are no kisses and hugs in the Middle East, just disputes and struggles, look at what's going on in Syria, Iraq, Libya, Sudan, Yemen and wherever. In the Middle East there is one rule, that phrased by Helene Ensign Maw: Freedom is for those willing to defend it".

Esser Agaroth (2¢):
Dr. Keidar provides a very good analysis of Israel's local Arab situations, especially the part about "no hugs and kisses in the Middle East" (between nations), but provides a lousy solution.

The short answer as to why his solution is a lousy one is that it has already been suggested countless times before, in one form or another by... 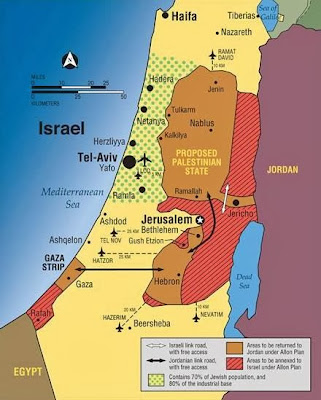 Techiya Party (1979-1992) a break off from the Likud, Annexation Yehudah, Shomron, and Azza (Judea, Samaria, and Gaza), yet without any mention of the departure of the Arabs.

MK Naftali Bennett (2013) Minister of Economic and Religious Affairs, and Head of the Jewish Home Party.


I would really appreciated if someone were to inform me as to how Keidar's strategy has any significant difference, let alone any greater chance of success, than any of the other plans, listed above, which have preceded it.

The second answer as to why Keidar's solution is a lousy one is also a short one.

His solution, like those similar solutions preceding, are in contradiction to the Torah, albeit Rabbi Elon's plan, may have eventually show to foot the bill,...eventually.

I do not refer to the strategies, necessarily employed in order to reach this ideal state of Torah Law reaching the heart of every Jew, and every millimeter of Eretz Yisrael, which may have to include moving slowly and adding objectives gradually.

However, there is NO excuse for Jews and "Jewish" parties within the system of government of a "Jewish" State to refrain from stating their eventual goal of the manifestation of Torah in This World, throughout Eretz Yisrael, unless, of course, this is not their goal.

Granting Arabs citizenship, at this point in time, is NOT one of those instructions, and is, in fact a violation of the negative commandment "lo techonem" (Mishnah Torah, Hil. A"Z 10:1-9*) In addition, reviewing Rash"i, Sforno, and the Or HaHayim on Num. 33:50-56 should clear up any confusion regarding the Who's Who? of goyim and how they relate to Eretz Yisrael.

*For the purposes of the negative commandment of "lo techonem," including [even temporary] residence he term 'oved 'avodah zarah does NOT exclude Muslims, a common misunderstanding of the Ramba"m's application of this term in this context (Rambam: Teshuvah 148, Tur, Beth Yosef, [uncensored] Ba"ch) Furthermore, even if Gerei Toshav, resident aliens accepting the 7 misswoth B'nei No'ah, were currently accepted, will they be placed under the conditions of missim we'avduth?

However, Dr. Keidar is certainly right about one thing...

"Pipe-dreams that have no connection with reality are not going to come true."

However, his criticism of pipe-dreams appears to be directed toward this misguided, naive, and/or suicidal Israelis, and Jews around the world, who envision a Western-style, "melting pot"-like coexistence with the Arabs.

Although the criticism raised here is an important one, and unlike most Jews, Dr. Keidar may have long since awoken to the smell of Jewish blood and rockets, his own pipe-dreams will die in the light of exposure to reality.

Not only will they fail to work, they will fail to lead the Jewish People to its ultimate goal of Torah sovereignty in the Land.

Torah is neither a pipe-dream, nor something to be placed on a pedastel, never to be touched.

For the Jewish People, the Torah is our reality.
Posted by Esser Agaroth at 5:08 PM

Having all of Eretz Yisrael will not occur overnight. You correctly state "I do not refer to the strategies, necessarily employed in order to reach this ideal state of Torah Law reaching the heart of every Jew, and every millimeter of Eretz Yisrael, which may have to include moving slowly and adding objectives gradually.". I don't think its realistic to expect politicians to speak the way you do. In politics, its not simply a matter of being right, its being smart. You know what happened to the Kach party. Perhaps this is why some of the religious parties are not taking an all or nothing approach.

P.S. That picture which you frequently post of Abbas and his boy with a map of Israel...Why are their eyes covered?

Agreed. I believe that we can perhaps even learn this out from HaShem's plan to give Yehoshu'a and Am Yisrael possession of the Land gradually, so that wild animals do not end up filling the void of the goyim, etc.

The end result was that it took hundreds of years for Ephraim to deal with its "Canaanite problem."

You're right. It's not realistic. They are blind (in more ways than one).

The Malbim on Num. 33:50-55 say that לשיכים בעיניכם means that the presence of the goyim will blind us. He uses the word לסכך for "cover," which I believe he derives from the interchangeability of the ס and ש.

My goal is to encourage Jews to start thinking and speaking this way,...even perhaps, only one at a time.

But, of course, I call attention to the gov't's approach, and its antithesis to Torah.

The covered part of the faces is related to the inyan of not looking into the eyes of a רשע. I go back and forth on this, as perhaps its more important that people be able to recognize him, than to cover his face.