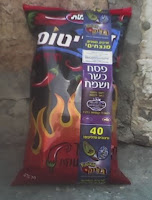 Jealous? I'm not even talking about the whole qitniyoth issue, believe it or not. I'm talking about the variety of cool, albeit unhealthy, snack options we have in Israel during Pesah (Passover) and throughout the year.

I suppose New York and Los Angeles have their fair share, but at what price?

I was going to rub it in, but I recently met Jew in Alaska, and wonder what he has to eat during Pesah. Nonetheless, Doritos might actually have the power to get at least one of you on the plane to Israel. Thus, I post this photo.

To entice you further, we have all kinds of chocolate, regular potato chips. Many restaurants have kashered their kitchens and have been selling, Chinese food with rice noodles, pizza, ice cream cones, potato and nut based baked goods. In previous years, have also seen shwarmah served in lafoth (large Iraqi pitoth) made from matzah meal. 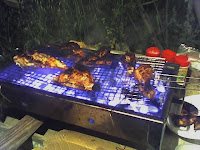 For those of you who are particularly strict, you can buy your own disposable barbecue for less than four dollars. You can remove the grill carefully, tovel it (immerse in a miqweh) if need be and get several uses out of it, by replacing the foil pan and coals, at minimal expense. Then cook your own meat according to your own style and standards (like we did in the photo; inspiration to do so from Jacob Da Jew), without having to kasher your regular barbecue, assuming you hold that's even a possibility. (Actually, this was with new hand-held grills I had bought last year, and a the rest of my old barbecue which had sat unused for at least two years.)

When arriving in Israel, you will also have more access to matzoth like this, purchased by my friend Shimon Yehouda from a Yemenite bakery in Jerusalem.

Get on the plane!
Posted by Esser Agaroth at 9:55 PM

You left out the single seder and more chol hamoed. Three day yontiff is rare here.

And it doesn't snow on Passover and Succot.

If you want to inspire jealousy, post some scenery. Telling me that unhealthy junk food is prevalent in Israel just makes me feel like that's one more battle conscientious parents need to fight in the Holy Land. Sigh.