(Israelnationalnews.com) Police and Shin Bet operatives arrested a Jewish youth from Kfar Tapuach in Shomron, a grandson of former MK Rabbi Meir Kahane, on Thursday morning. Eyewitnesses said the youth was not told why he was being arrested, but only that he would be taken to Tel Aviv. Police stated later in the day that he was suspected of involvement in an arson attack on a mosque at Kafr Yasouf in Samaria three weeks ago.

His father, Binyamin Ze'ev, and his mother, Talia, were murdered in a terror gun ambush on December 31, 2000. His grandfather, MK and fiery rabbi Meir Kahane, was assassinated ten years earlier.

Nationalist activists reacted to the arrest by saying: “We hope the Shin Bet and police do not abuse the boy the way they usually abuse settlers. He is an orphan without a mother and father, who were murdered in a terror attack.”

Security forces have been busy trying to identify and arrest the people involved in the mosque arson at Kafr Yasouf in northern Samaria on December 11. Unknown people entered the mosque in the pre-dawn hours, set alight a carpet and bookshelves, and scrawled some graffiti on the floor in Hebrew promising revenge for Arab terror.

...that his parents' yartzeits were on 5 Teveth.

...that the Westernized/assimilationist government and government lackeys probably went by the Gregorian date, December 31, happily waiting for the Hebrew calender finally to fall out of disuse.

I do not believe in coincidences.

Did Me'ir David do it? He had an alibi, an alibi which could easily have been checked out without the harassment, so, mostly not.

As politically-incorrect as it may be, neqamah (revenge, and when involving goyim) IS a misswah. So you will not find me shedding any tears for a burned-down mosque.

I must admit that I do not know Me'ir David very well at all. We have spoken only a handful of times. His family took care of that, as they did not approve of my associations with certain other Tapu'ah residents. However, I can say that Me'ir David is a very gentle young man who works hard at his learning and at building up the land with the rest of his family.

That being said, I also believe very strongly that he is being raised, ...shall we say..., specifically NOT to grow up to be exactly like his father, Rav Binyamin HY"D.

Years ago, two of his uncles (one the gabbai, and the other ba'al qore') both voted to work toward removing the "Kahane stigma" from the [now] Central Tapu'ah beth k'nesseth (...whatever the hell that was supposed to mean). Both Me'ir David and another uncle voted against the resolution. What was he supposed to do?

This gabbai has continued to insist that the meaning of the word "stigma" in Hebrew has a much weaker connotation than its usage in English. Then why was such a vote necessary, if the "stigma" was not so strong? No response.

But this single example is only one of the many reasons for the above belief. I am afraid that other reasons cannot be listed here.

Try as they may, though, they will not succeed. Every time I bring up having lived in Tapu'ah, the reaction is always the same, from secular, left-wing Jews, to Haredim, to mamlachtim, to Kahane followers and sympathizers.

"WOW!"
The only difference is the tone. Positive or negative, everyone believes the same thing: K'far Tap'uah is an "extremist" town. No matter how many mamlachtim and "mind their own business in exchange for cheap housing" college students the "powers that be" bring into the town to live (and to vote, thus keeping them in power), it will always be Rav Binyamin's town, Rav Binyamin who once said:

By letting you in on this secret, I expect to get more than a few perturbed emails from my former neighbors, who feel strongly about Rav Binyamin's strategy.

I'll just tell them not to worry. No one blog post has the power to break the so-called "stigma," let alone influence of the Rabbis Kahane HY"D, Me'ir David's father and grandfather.

So, what was the Shin Bet (Shabba"k/secret police) doing in Tapu'ah? Oh, it's always something. If it's not one thing, it's another.

Just another opportunity to make a nasty attack on the Kahane family?

Just the usual general harassment meant to toy with settlers, in an attempt to break them?

Just more of the usual encouragement to create and maintain divisions amongst the settlers?

A ploy to get Kahane sympathizers to come out of the woodwork, due the outrage of such treatment of an orphan? 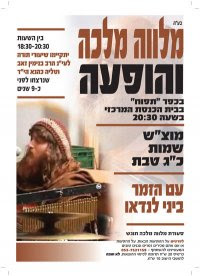 In the meantime, you may want to attend the memorial concert being held in K'far Tapu'ah, next Mossa'ei Shabbath, starring Bini Landau. If you cannot make it, then you will be able to enjoy it on the Voice Of Judea YouTube Channel, the following week.

********
Read another neighbor's take on the arrest in Now I Am Angry at The Torah Revolution.
Posted by Esser Agaroth at 11:06 PM

My recollection is that he is a very young, very mild kid, not someone who was likely to commit arson. I have been wondering about who was arrested... The western and English Israeli press never released a name.

That poor kid. Nobody will let him be himself. Life's tough

I pray that he and his family will live without harassment.