19 Kislev is considered to be an important date on the calender for Hassidim. It is the yartzeit of the Magid of Mezerich, as well as the anniversary of the release of Rabbi Shniur Zalman of Liadi (Ba'al HaTanya) from prison. This date is referred to by many as the birth date of Hassidus.

19 Kislev also has significance to Religious Zionists, as it is the yartzeit of Rabbi Moshe Tzvi Neriah, Member of K'nesseth (National Religious Party) and the founder of the B'nei Aqiva yeshivot and ulpanot. Until then most all religious education was controlled by “Haredim.”

But, I would like to call your attention to the day before, the 18 Kislev. For I believe that this day should also be a significant date of commemoration for Hassidim and Religious Zionists. 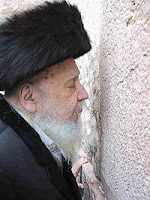 18 Kislev marks the first yartzeit of the Bostoner Rebbe, Rabbi Levi Yitzchak Horowitz. He died last year at the age of 88.

The Bostoner Rebbe is well-known for attracting many college students from Harvard and MIT, and bringing them back to Torah. He is also well-known for his Rofeh International organization...

Mission Description: The organization is dedicated to provide Medical Referral and Support Services to the needy. The organization assists the sick and their families with referrals, Hospitality & Kosher meals during their stay in Boston.

Typically, a patient would call the center for assistance in finding an expert physician in the problem area. Often, patients send in advance copies of their medical records. Those records are forwarded to specialty doctors in the Boston area. When the patient arrives Boston, a furnished apartment is awaiting for him to be used during the visit by his family. Kosher meals are provided for the first few days of stay as well as Shabbos arrangements.

What struck me about the Bostoner Rebbe was an incident which occurred over five years ago.

The Bostoner Rebbe was a member of the Council of Torah Sages, along with several other Rebbes and Hachamim. What set him apart, though, was his integrity. When the Council of Torah Sages was discussing the impending expulsion of Jews from Azza (Gush Qatif, N. Gaza Strip) and the Nothern Shomron, the Bostoner Rebbe was concerned with determining what the halacha was on the matter, not with how much money he would receive from the Sharon government, albeit for religious educational institutions.

The Bostoner Rebbe demonstrated to the Council of Torah Sages that it was forbidden to relinquish these lands to goyim. He was in the minority, of course. Yet that did not make any difference to him.

The Bostoner Rebbe's actions also contributed more toward Ahduth Yisra'el (Jewish Unity) than those of any rav, since Rav Kook ztz"l,...aside from Rav Kahane hy"d, by taking the opportunity to reach out to Religious Jews of a different flavor than his, not for any ulterior motive, but simply because it was the right thing to do.

Such a man, who puts Torah Law first, ahead of money, and reputation deserves the admiration of all, especially when such men have become increasingly difficult to find.

The actions of the Bostoner Rebbe also put many of the so-called Religious Zionist “rabbis” to shame, by showing more love and concern for Eretz Yisra'el than they, as well as demonstrating the nondetachable interconnection between the Torah and Eretz Yisra'el.

May the memory of this Tzadiq be for a blessing.

Here are two videos of the late Bostoner Rebbe, the first an interview with Israel National News TV, and the second of his visit to Azza before the expulsion.


The Bostoner Rebbe visits Gush Qatif
Posted by Esser Agaroth at 12:08 AM