My comments on this on-going issue are interspersed, and are in blue italics.

Kiryat Arba rabbi refuses to be questioned by police over his part in book calling for murder of gentiles, argues 'it is unacceptable that some Justice Ministry clerk will tell rabbis what to say' 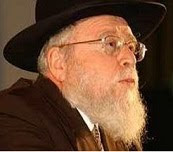 Some 1,000 people demonstrated outside the home of Rabbi Dov Lior in Kiryat Arba on Tuesday in protest of the arrest warrant issued against him for suspected incitement.

On Monday, police issued the warrant over the rabbi's refusal to be questioned in relation to the forward he wrote for the book "The King's Torah" which calls for the murder of non-Jews.

Now, wait a minute. How is it that IsraelNN.com reports...


...Rabbi Lior is wanted for writing an approbation for the new controversial book Torat HaMelech which states that it is within Jewish halacha to allow for collateral damage if it will save the lives of Jewish soldiers.

The United States certainly does not think so. It has caused countless "collateral damage" in Afghanistan and Iraq, and other countries, without a second thought.

That being said, if IsraelNN.com is presenting the correct version, then that is a far cry from what some halakhic opinions allow. Check out the Ramba"m's Hil. Melakhim u'Milhamothehem for yourself.

Looks I might want to read this book, to see what it says for myself.
Now, back to the YNET story...


The protesters are claiming that the State is trying to silence the rabbi. Among the protesters were Knesset Member Michael Ben-Ari (National Union), members of the Kiryat Arba city council, Women in Green chairwoman Yehudit Katzover and the rabbi's supporters.

Rabbi Lior also attended the rally and slammed the Justice Ministry and State Prosecutor's Office for ordering copies of the books be cleared out of stores.


Once again, I have this to remind my brethren abroad that Israel does NOT allow the free speech which you enjoy in North America, and elsewhere. I just checked Amazon.com. Books such as The Turner Diaries are still available for purchase.

The truth is that is this were a piece of literature about attacking settlers, it would have garnered a much different reaction.

Hey, wait a minute! Such a piece has already been written, and it definitely received a completely different reaction than Derekh HaMelekh.


"It is unacceptable that some junior clerk will dictate the rabbis what to say," he said. "I believe the State of Israel does not have a policy aimed at silencing the rabbis and that is why we call on the prime minister to issue an unequivocal order to stop this stupid persecution."

He further added, "We do not rule out the State of Israel which is a divine miracle, but we have a problem with its conduct." Referring to the arrest warrant he said, "This is a humiliation of the Torah and an attempt to harm rabbis who express their opinions on relevant topics."

Inciting book
The book "The King's Torah", which was written by Rabbi Yitzhak Shapira, presents war-time conduct rules according to the Torah. Among other things, it noted that anyone who serves as "a human shield for our enemies" can be hurt.

OK. So, finally in this article, we have mention of "collateral damage." It sure took long enough.

Nonetheless, everyone seems to be missing the point, that "collateral damage" is not a Torah concept; it is a Western one. (See the above Ramba"m citation.)


Rabbi Lior wrote the forward for the book in which he agreed with the book's content.

Rabbi Lior said during the demonstration that he accepts the rule of law and is not trying to defy the state. "Rabbis are elected representatives who answer questions the public is concerned with. Clearly we do not engage in politics but these are important issues which concern us all directly and we must therefore respond. It is the rabbis' right and duty to express their opinions on these matters. They were elected on this basis until the State declares rabbis are banned from expressing their political opinions."


1. There is a risk of a conflict of interest for State-appointed rabbis. How can they truly feel free to express their opinions regarding the actions of the State, when the State is paying their salaries?

2. Many issues which appear to the Western eye as political issues area really halakhic issues. (All aspects of Jewish life are guided by halakhic principles, including how to run a Jewish government and how fight a war, not just Shabbos and Kashrus shailos.)

3. The State would never ban rabbis from expressing opinions which are in line with the State's policies (...of kowtowing to the will of the West, etc.).

The Kiryat Arba protestors promised that this was just the beginning of their struggle. "We shall not let the rabbi be touched and will physically block any attempt to do so," Kiryat Arba councilman Bentzi Goffstein said. "This is defiance against the rule of Torah. Torah law precedes state law."

Bentzi Goffstein said a mouthful. He also stated the main focus of our day and age,...of our struggle.

This was not the first time Rabbi Lior, and others, were "questioned" (more like interrogated).The issue of supporting this book may be an extreme example. However, even the statement by Goffstein is considered "extreme" by the religious mamlakhtim (un-dying State loyalists).

I hope that these Jews do not have to learn that there are, indeed, many conflicts between Torah Law and Israeli State Law, and the number of these conflicts increase on a regular basis.

They must learn and acknowledge this fact, or they will surely lose their Heleq ba'Olam HaBa (portion in the World To Come).

Better they should stop, and think, and choose to become a real, Religious Zionist.
Posted by Esser Agaroth at 6:30 PM

Well said. This latest attack on the Torah is typical of the erev rav. The tragedy is that most "religious Jews" still don't get it. This is hardly new though. People only get upset when their own Rabbis get in trouble. Most Rabbis don't take such "provocative" stands in defense of the Torah(like saying the Torah truth). At the end of the day, the people at A7 are as clueless as those who wrote for Ynet. Hence their repeated failure to call a woman who was recently killed by Arabs a missionary. They don't want to alienate their "friends" and stop a possible cash flow.

Shalom!
Well in this headline A7 calls her a missionary: http://www.israelnationalnews.com/News/News.aspx/141265

And that article isn't the only one in which she's called a missionary.
Hadassa

Stop playing games with me Uri. There are many articles in A7 written by different authors. Some of the writers are truly fine people who write good articles. But there is a prevailing tendency at A7 among many of the bigwigs to both ignore the missionary problem and actually reach out to x-tians. And in this specific case, I can remember at least two articles which made no mention of it. One is too many. This woman was a spiritual Nazi. A7 needs to open its eyes to Esau, instead of trying to find a friend in them. So do you.

Shalom!
For one Daniel, you don't read very carefully. The post is signed Hadassa. I don't always remember to sign out of the account I share with my husband. For two, who's playing games? I find your attitude insulting. I gave you no reason to think that I reach out to x-tians, in fact the logical conclusion to my comment is that I oppose them.