Islam Is Not Immune

All around certain neighborhoods in Jerusalem, and all through my long journey home every night from work, through the "oppressed and occupied [by Arabs] territories," I see these tacky Ramadan, crescent-shaped decorations, hanging in windows. I do not remember seeing them in previous years. But it is possible I am just blocking out their memory.

Anyway, I cannot help but laugh when I see them. Now it seems that not even Arabs are immune from the tacky materialism of holiday money-making. I used to think this was a tacky Western thing, or a tacky American thing. Apparently, Islam is not immune. 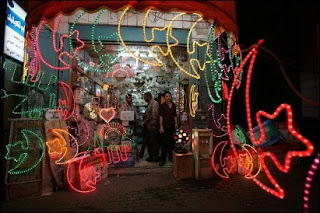 Now, I have to admit that all of these crescent moon decorations strung together look kind of cheery. Although, I suppose the same could be said for a Hamas summer camp for kids.... 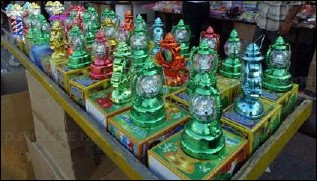 Also, "cheery" (I guess) are these traditional lamps. But they ARE pretty tacky looking. I distinctly remember seeing news stories in previous years which included the display of these cool looking aluminum lamps, which are given as Ramadan gifts. What happened? I mean the lamps pictured here are REALLY tacky looking.

Now before anyone criticizes me for hypocrisy, let me just say that there are some very cool Sukkoth decorations you can get for a reasonable price. They can also be put away and saved for future holidays, as they are of classic design and content.

Yes, I even like to string lights in my Sukkah, as long as they are not the flashing kind, which ARE very tacky. You can buy them in the Ge'ulah neighborhood in Jerusalem. Just don't tell anyone what the "Luces Feliz Navidad" on the label means. (wink) They are not tacky; they are cool! They also come in a variety of shapes, like chili peppers. (Not sure where to get those, though)

Here's a Ramadan joke to cap off this post for all of my Muslim friends... Oh, that's right; I don't have any.

So, here's a Ramadan joke to cap off this post for all of my Muslim enemies. Sorry, but it's not really offensive. I tried. Honestly, I did.

When I was in Me'ah Sha'arim for Shabbath a few years ago during Ramadan, I noticed that there were two night time cannon blasts which went off about an hour apart. The cannon blast, of course, signifies official "night time," informing Muslims that they may now break their daily, daytime fast.

The sound of two cannon blasts about an hour apart puzzled me. So, I asked my friend, a Yeshiva Mashgiah and in whose house I was staying if he happened to know the significance of the two cannon blasts.

"The second cannon blast is for those Muslims who hold by Rabbenu Tam."

I enjoyed all the tacky lights.

that got a chuckle from me.

Unfortunately, the Ramadan decoration was already around last year. Especially at Jaffa Gate where it is also now. Even the municipality seemed to have hung up some candles.

By the way, their decoration very much reminds me of the Chanukkah decoration in Jaffa Road.