Imagine, if you will, a bridge: A great bridge of magnificent, contemporary architecture, designed to bear great caravans of riches over another, older route still filled to its brim with its own thrush and movement of activity.

The bridge allows for the uninterrupted flow of the crosswinds of transportation and commerce. 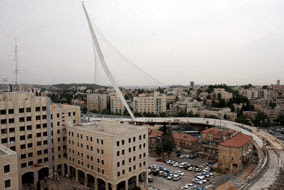 The great bridge is suspended, as if by magic, from the most great and powerful idol of the god "Phallus." 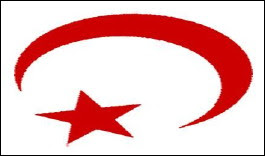 The bridge's shape sweeps around smoothly, almost completely surrounding its life-bearer, coincidentally, or not, in the shape of the crescent, icon of one of the greatest enemies of the Jewish People.* From above, "Phallus" appears as the star completing the enemy's joyous representation, yet restrained by its netted thong.

Oh, great and wondrous bridge! Surely, only a monumental ceremony of dedication, filled with rockets and pagan dances, could chance reaching the level of your glory!

Only, first we must cover up your pagan character, in order to introduce glory and worship, and praise of the enemy in secret. Let us bring a shofar blast, so that viewers will be stunned and aware of the virgins suspended on display are actually the sacrifices to made in your honor, appeasing the great "Phallus," glorifying and paganizing the entrance to the great capital city.

The northwestern corner of the capital city now appears to have a gated entrance, a gate into the city, from the west.... 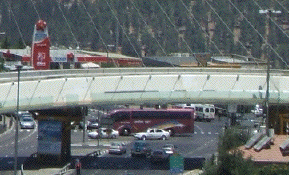 View from inside the "gate" looking outward

...The primary power** of the Erev Rav (mixed multitude) is at the gates of Jerusalem, particularly at the entrance to the city, which is on the western middle line.

*********
*The same suggested comparison was made regarding the (9/11) Flight 93 Memorial in Pennsylvania. See the Crescent Of Betrayal site for more information.

**"Primary power" - The Kenneseth, the Supreme Court, and the Israeli Broadcasting Authority are all located within easy walking distance from the western entrance to Jerusalem.

I recently discovered that the Torah Revolution blog said much of what I say above, but more bluntly in A Goy Bridge.

For more on designer Santiago Calatrava's bridge in Jerusalem, you can check out Mr. Comic X in Jerusalem who has written quite a bit about it, and continues to follow its progress.
Posted by Esser Agaroth at 11:08 PM

I've heard a lot of different opinions on the bridge, but yours is truly unique.

The location of Pitcha DeQarta is according to tradition near the Histadrut building on Strauss Street.

Thanks for the link!

Unique? You're probably just being kind.

Yeah, I knew someone was bound to mention that "tradition" says it's there.

Do you know who's tradition?

We won't really know where it it until the battles ensue AND are won.

Thanks for the additional information.

Although, this post was meant to be tongue-in-cheek, my allusion to the various Muslim and additional non-Jewish associations with the bridge was a serious castigation of the current state of affairs in Israel.

As it happens, the shape of the crescent bridge is in rotation 180 degrees relative to the qibla direction. It still does not bode well that the bridge, intentionally or unintentionally, is in the shape of an important Muslim symbol.

I mentioned the Flight 93 Memorial as a precedent. I have been very disturbed by the transformation of a memorial for the Flight 93 into a mockery of their heroism.

Please everyone. I am aware of the "traditions."

I was only taking liberties with the language.

And, furthermore, before the bridge, there has been quite a bit of discussion regarding the placement of the courts, the seats of power, and communications center {Reshuth HsShiddur} - no a coincidence, regardless of where specific battles will take place.

Likewise, who knows where those buildings will be in the future.

My "we" comment is a standard comment to those individuals using the generalization "we." Even though I do not happen to believe that MCX is one of the perpetrators of such generalizations, and was commenting in an innocent manner.

If he were a known member of the Mishnah Brurah police, he certainly would have felt the full brunt of my wrath.

Sorry if you feel like you're being nudged because I wrote where it can be found. You did write: "Do you know who's tradition?"

Interesting, where are the pics from?

The bridge pics are from public sources, if I remember correctly, and the crescent is from Alec Rawls website.