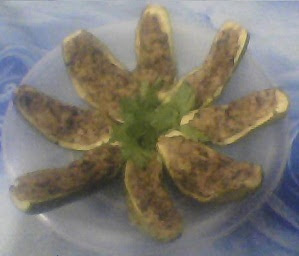 Ingredients:
5 Zucchinis
1 1/2 packages fresh mushrooms
1/2 brown onion
4 cloves garlic
oregano
basil
salt
Preparation:
Slice zucchinis long ways, and gently scoop them out. Set aside the zucchini insides, along with two of the hollowed out shells (halves).
Broil the zucchini shells at 150 C for 20 minutes.
Meanwhile, fry the coarsely chopped onion and garlic, until the mixture browns. Puree until it becomes a paste or very thick looking cream. Finely chop set the shells which were set aside, the zucchini insides, and mushrooms. Fold into the onion and garlic mixture. Add a dash or so of basil, and twice as much oregano. as well as salt to taste.
Stuff the shells and broil for an additional 20 to 30 minutes.
Enjoy!
*********
Many people scoop out the zucchinis halved in the other direction, producing cylinders, instead of the above potato skin look. That is an option. However, my goal with posting recipes on this blog, is to make them easy for your average yeshiva bochur to prepare.
Some would prefer to add egg and/or a grain to the filling to hold it together, but this is really not necessary.
Also, I forgot the salt this time I made mushroom stuffed zucchini. Anyone already used to a no- or low-salt diet will not notice. With the salt in the chicken served as well this past Shabbath, no one else noticed either!
Posted by Esser Agaroth at 4:50 PM

Email ThisBlogThis!Share to TwitterShare to FacebookShare to Pinterest
Labels: Food And Drink, Life In Israel, Shabbat

Looks delicious. So when are you coming over for Shabbat so you can prepare them for us?

send to kcc, or host one

Batya, done. I'll see when I can host, and let you know.