A neighbor of mine expressed his heart felt prayers for those who were hit by Hurricane Sandy, and who have been suffering as a result. He asked those individuals to ask themselves what message God was sending them through this hurricane.

(I am paraphrasing, as I do not have his permission to quote him here.) 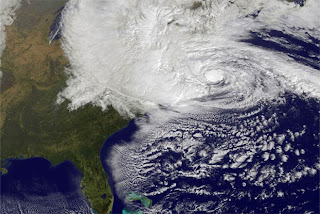 I am just helping to pass along the suggestion for introspection.  But, perhaps enough time has passed to where I can do a little bit more than pass on the suggestion.

Most of you already know what I am going to say.

No doubt there will be countless excuses and counter-arguments to the need to pick up and transport ones entire lives to Eretz Yisrael, the only true homeland of the Jewish People.

Some just don't get it.

Matzav.com reports that the Agudas Yisroel of Bayswater was destroyed, and yet...


“The building of the Agudah is still standing,” a local resident said, “but everything inside - everything - has been destroyed. The shul will require a total renovation after just completing work made necessary after Hurricane Irene. From an aron kodesh, to a bimah, to seforim….there is just nothing that can be salvaged. ”

Build the next Agudas Yisroel building in Eretz Yisrael.

The non-coincidences of this year's major hurricanes occurring on mentioned by Tomer Devorah should also be checked out, for additional "wake-up" material..

Sandy hasn't been the only warning.

Remember the volcano in Iceland?  Countless Jews were unable to get back to Eretz Yisrael after their Pesah "vacations."  You know, Pesah,...the holiday when we are finally on our way to make our homes in Eretz Yisrael, the Promised Land?  It is also one of the holidays when we are supposed to make pilgrimages TO Jerusalem, and not to anywhere else, certainly not to Egypt, the Sinai being a popular Pesah holiday destination.

During the Iceland volcano eruption, one rabbi even persisted in trying to leave Eretz Yisrael for a lecture or other such event, but was brought back each time he tried to leave.  I'm not sure that even he "got" what was going on.

B"H - Yet, the 70% exit-polls figure that indicates the number of "Jews" who voted for Barak Hussein Obama is very close to the 80% of Jews who died in Egypt after the Exodus. Evidently there is something terribly wrong in the American Jewish community and reading the signs (and talkbacks to articles by members of that community) it is perhaps not exagerated to think that they are far removed from Torah, Mitzvot and ultimately from Hashem. Talkback # 23 on No reason to panic http://www.ynetnews.com/articles/0,7340,L-4303412,00.html for example reads: "American Jews will never reject Israel... as of now we're rejecting Netanyahu, Lieberman, and the settlers that along with Palestinian terrorism and intransigence we believe are totally screwing up any chance for Israel to ever be able to live in peace. Unless I'm mistaken, roughly half of Israel that's anywhere to the left of Likud agrees with us but I guess we're all just "self-hating Jews," right?" Right, even if I would prefer the term Jew Hater Jew or JHJ: Hating yourself is one thing. Standing idle by your bros blood and hating me is a different story I think. Anyhow Yaaqov, well said, let's indeed hope and pray that they repent and come home. But I am not optimistic on this.