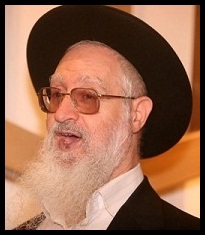 Erev Shabbath, the neshamah of HaRav HaGa'on Ya'aqov Hai ben HaRav Ovadiah Yosef ztz"l, passed into the next world, and he was laid to rest in Jerusalem.

About a year and half ago, a tumor was found in the rav's pancreas, and, in spite of treatment, it spread throughout his body.  (from Kikar Shabbat)

Rav Ya'aqov Hai was the rav of the Jerusalem neighborhood Giv'ath Moshe. He was a renowned poseq, unafraid to defend the Torah and speak the truth, even if that meant going up against his own father, Rav Ovadiah, may he and his family be comforted in their time of sorrow, proclaiming that it is forbidden to give up pieces of the Land of Israel. The father and son rabbis, B"H, have since made shalom between them.

Rav Ya'aqov Hai was also unafraid to go up against popular rabbis, unabashed in their distortions of the Torah, and in their leading Jews down the path of sin. Rav Ya'aqov Hai refused to remain silent, even in the face of the potential consequences.

Pictured below are three generations of the Yosef family in happier times, almost two years ago.

In the following video, you can see one of the ways in which Rav Ya'aqov Hai's children honor him, and will continue to honor his memory. Here his son Yehonatan gives a guided tour of the reclaimed Jerusalem neighborhood of Shimon HaTzadiq. Notice the mixed group of Haredi, Religious Zionist, and Secular participants. Yehonatan has already been establishing himself as a leader in the direction of Jewish unity.

Posted by Esser Agaroth at 9:23 PM