The Only Redeeming Quality Of Lag b'Omer

One of the only redeeming qualities of Lag b'Omer is the custom of shooting a bow and arrow. Children play bow and arrows, but even the adults get involved for at least one shot.

You may have thought that this custom originated from the use of bows and arrows during the Bar-Kokhba revolt, or from some other Jewish warrior oriented era. After all, the students of Rabbi Aqiva whose deaths Jews mourn during the Omer, were not only scholars, but warriors who fought against the oppressive rule of the Romans.

However, this custom apparently did not originate from Jewish heroic feats, but rather from a time for which the bow is simply something symbolic. 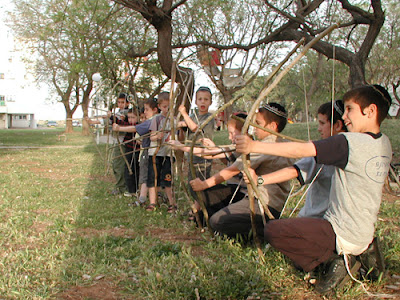 So, then why do I believe this is one of the only redeeming customs of Lag b'Omer?

Well, because maybe one, even one kid shooting a bow and arrow, might just get the juke idea in his head that shooting a bow and arrow is cool, and want to learn archery for real. Then, when the Israeli government completes its task of taking all of our guns away (חו"ח ולא עלינו), this one kid, but hopefully more, will be able to pass on this skill to others, when the need arises.

Of course, Jews are hardly strangers to archery. When Yehonathan ben Sha'ul tells David how he will signal him...

I Samuel 20:20 And I will shoot three arrows to the side-ward, as though I shot at a mark.

And, after Yehonathan's death in battle, King David remembers him.

II Samuel 1:17 And David lamented with this lamentation over Sha'ul and over Yehonathan his son,  18 and said--To teach the sons of Yehudah the bow....22 From the blood of the slain, from the fat of the mighty, the bow of Yehonathan did not recoil, and the sword of Sha'ul did not return empty.

Jews should also be encouraged to learn martial arts, as well as how to use knives, sling shots, and slings. You know, "just in case."

I Samuel 17:49 And David put his hand in his bag, and took thence a stone, and slung it, and smote the Philistine [Goliath] in his forehead; and the stone sank into his forehead, and he fell upon his face to the earth.

Here's a great video on how to make a sling. It's not as difficult as I thought, and, unlike firearms, is not regulated by the government,...yet.


If we are going to have a holiday, which interrupts the mourning of Rabbi Akiva's students, then let us at least remember why they died in the first place. Let us also learn from history, instead of repeating it, and be prepared to deal with oppressive, foreign governments, just like they did.
Posted by Esser Agaroth at 1:05 PM