The Battle in Beit El: What's the Fight About?

YNET: The battle in Beit El: What's the fight about?
High Court's order to destroy Draynoff buildings in West Bank community follows an ongoing litigation between State of Israel and a Palestinian petitioner over private land seized by the IDF in 1970.

A dispute over piece of land seized by the IDF in 1970 is back in the headlines following recent clashes between security forces and settlers in Beit El and the High Court's order to tear down two controversial housing structures, known as the Draynoff buildings, in the West Bank community. When and how will this dispute end? Only time will tell.

Three years after the Six-Day War, a private piece of land north of Ramallah was seized for military purposes. Eight years later, the government approved the establishment of the Beit El community on that land.

Thirty-two years later, in 2010, Abd al-Rahman Qassem petitioned the High Court of Justice through Attorneys Michael Sfard and Shlomy Zachary of the Yesh Din human rights movement, claiming that some buildings in the western part of Beit El were built on private land which belonged to him. The buildings' construction was illegal, and that very year the Civil Administration issued an order to stop the construction work and demolish the buildings. (cont.)

Esser Agaroth (2¢):
OK. I am not even going to address the "32 years later" issue, no matter how ludicrous it is, because it is also completely irrelevant.


The IDF did not seize this Land; they conquered it!

Numbers 33
50 And the LORD spoke to Moses in the plains of Moab by the Jordan at Jericho, saying: 51 'Speak to the children of Israel, and say to them: When you pass over the Jordan into the land of Canaan, 52 then you shall drive out all the inhabitants of the land from before you, and destroy all their figured stones, and destroy all their molten images, and demolish all their high places. 53 And you shall drive out the inhabitants of the land, and dwell in it; for to you have I given the land to possess it. 54 And you shall inherit the land by lot according to your families--to the more you shall give the more inheritance, and to the fewer you shall give the less inheritance; wheresoever the lot fall to any man, that shall be his; according to the tribes of your fathers you will inherit. 55 But if you will not drive out the inhabitants of the land from before you, then shall those that ye let remain of them be as thorns in your eyes, and as pricks in your sides, and they shall harass you in the land in which you dwell. 56 And it shall come to pass, that as I thought to do unto them, so will I do to you.

The fact that the Israeli Supreme Court, supported by many Member of K'nesseth, and operatives back the scenes, seem to want to stretch themselves as far as humanly possible to find ways and means to give away parts of our conquered Land, may, at first glance, be confusing. However, it is really not that hard to understand.

MK Yair Lapid explains it for us quite well is a recent Facebook status. 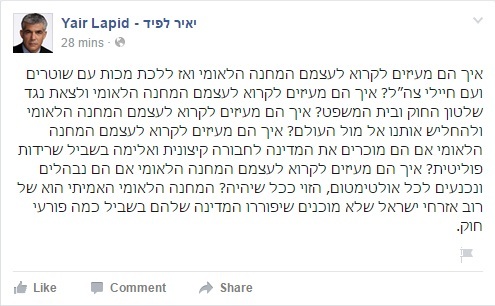 Esser Agaroth (2¢):
MK Yair Lapid is not the only one who seems to think that giving up our Divinely promised, and given, Homeland, because an Arab comes to claim it, and the Israeli Supreme Court backs him up, is representative of the "national camp."

It is representative of the State "national camp."

The horribly misguided children serving drinks to their own expulsion forces are part of this camp.

They are the brainwashed, robotic, State loyalist drones in training (AKA Mamlakhtim). They are part of Yair Lapid's national camp, not the Torah's "national camp." 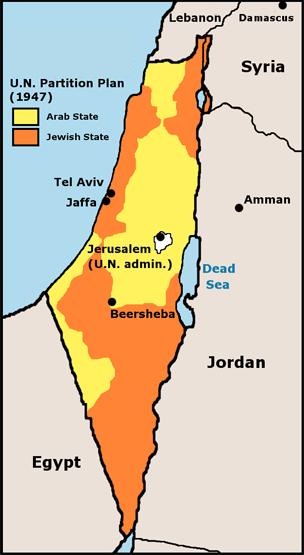 What if an Arab, or anyone else for that matter, came to claim a yellow piece of the on the right? After all, those yellow pieces conquered by the State of Israel do not appear to have been approved by the United Nations. Would it be given to that person? What if one hundred or one thousand Arabs did the same?

What if those Arabs desiring to claim their homes and lands, abandoned in 1948, under the proposed "Palestinian Right of Return?"

What if those properties included Sheikh Munis, where parts Tel-Aviv University and the left-wing, upscale Ramat Aviv neighborhood are now located?

Would they be returned to their "rightful," Arab owners?

I sincerely doubt it.

This what the battle in Beth-El is really about, not having your cake, and eating it, too.
Posted by Esser Agaroth at 11:24 AM