You have already heard of the so-called “Two-State Solution,” which is completely unacceptable according to the Torah.

You have also heard the various versions of quasi-One-State Solutions, such as those of the now defunct, ב״ה, Techiyah Party, and of Minister of Education Naftali Bennett.

But, have you heard of the three-state solution? 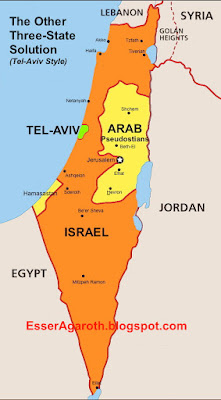 It is not the one with the theoretically Jewish, State of Israel, bordered by two Arab terrorist states, one in Yehudah and Shomron (Judea and Samaria) and the second in Azza (Gaza).

No. This is the one which also has one theoretically Jewish, State of Israel, and is also is bordered on two sides by bastions of Arab terror. However, in this three-state version, these two provinces are part of the same terrorist entity. So, where is the third state of the three-state solution?

That’s right! It has been suggested that Tel-Aviv become its own, independent city state.

Many Tel-Aviv residents are already living in a bubble. So, now it seems, they want to make it official, by becoming a physical bubble, in addition to a psychological and spiritual one.

There was even a 2006 movie made about this called "The Bubble" (הבועה), which I cannot even link to here, due the highly immodest one-sheet (publicity poster). The movie attempts to show how the residents of Tel-Aviv really are in touch with what is going on in the rest of Israel.

Will the City State of Tel-Aviv allow the African insurgents, currently raping and pillaging South Tel-Aviv to remain in their independent Tel-Aviv nation. Or will they make up some creative excuse to leave out these parts of South Tel-Aviv, from their "limousine liberal" paradise, claiming that they were never part of Tel-Aviv to begin with, or some other such nonsense.

What will happen if Arabs from Yaffo want to move into the Northern Tel-Aviv neighborhood of Ramat-Aviv? Will they let them? Or will Yaffo even be included in the Tel-Aviv city state in the first place? I am sure that they convince themselves that it is in the Yaffo Arabs’ own best interest to enjoy an independent City of Yaffo. Segregation, leftist style.

Will Tel-Avivians allow the Filappino, Chinese, Thai, Indian, and other foreign workers, for whom they have been advocating, to obtain citizenship in their new utopia?

Will Tel-Aviv apply to join the European Union? Boasting laws on its books more progressive than some European nations themselves, a high percentage of secular citizens with European heritage, probably willingness to make English or perhaps even German its new official language, and let us not forget Tel-Aviv's large collection of living, Bauhaus architecture, Tel-Aviv's should be cinch, right?

Even many of Tel-Aviv's citizens, not of European heritage, try desperately hard to Ashkenize (Europeanize) themselves, having succumbed to the oppressive, anti-Torah indoctrination as children, and continued brainwashing into numbed-out, "progressive" mouthpieces as adults.

Besides the anti-Torah problems with the Tel-Aviv-Three-State-Solution, a new, City State of Tel-Aviv would not last long anyway. No matter how much Tel-Avivians advocate for their version of "peace" (more like "piece") with the Arabs, they are going to get rocketed out of existence by Hezbollah, Hamas, ISIS, or all all three, as Tel-Aviv remains the prime target within the world of Arab terror.

Unfortunately, Tel-Aviv residents, or citizens, cannot, or will not, see this.
Posted by Esser Agaroth at 11:25 AM

Are you including Bnei Brak, Ramat HaSharon, Ramat Aviv ALSO in the Tel Aviv Bubble?
I would make that little green area a bit bigger to include the other exclusive areas!
Very cute post.