Mordechai Mayer, 18, from Ma'ale Adumim in the West Bank, arrested five months ago on an administrative detention order on suspicion of belonging to a Jewish terrorist organization was released last Sunday without being charged but was given a restraining order barring him from the West Bank.

Mayer was released the day the indictments were filed in the Dawabsheh murder case. He was arrested a few days after the attack on the Dawabsheh family home in Duma. "It was all a big lie from beginning to end," he told Ynet on Tuesday. "They just harassed me, just as they did to all the others who were detained." 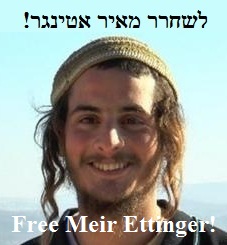 Mayer was taken initially to Rimonim prison for two months and was then moved to Eshel prison. Also detained at the same time were Evyatar Slonim and Meir Ettinger, considered one of the main targets of the Shabak's Judea Brigade and the leader of the "Revolt" group. Ettinger is still in detention, and in the coming days it will be decided whether he will be released. As of now there is no knowledge of an indictment being prepared against him.

Mayer recounted that "six or seven policemen came for me in the morning, issued me with an administrative order and told me I was going to administrative detention. They did not let me take anything. They threw me right away into a cell without explanations. They hurled false accusations at me and did not let me speak at all. I feel that they have stolen five months of my life for nothing. There is a sense that they are hunting after those who wear a kippah and have peyot."

Mayer spent some of his time in detention with Slonim: "We mainly learned Torah together and strengthened our love of the Torah and the country", he said. (cont.)

Esser Agaroth (2¢):
Mordechai Mayer has been released, after five months of incarceration, with limited access to counsel. The Shabbak, with support of the Israeli "justice" system, was able to keep him, and other boys, locked up, under the auspices "administrative detention," something left over from the British Mandate, which allowed the British to hold Jewish freedom fighters, whom they thought were threats to their maintenance of control over Israel, pretty much indefinitely.

Often these Jewish freedom fighters from organizations like Etze"l and Lech"i were turned over to the British by their fellow Jews from Ben-Gurion and Rabin's Haganah/Mapai.

The administrative detention and probable torture of these boys was even supported after the fact by the Defense Minister, the Justice Minister, and the head of the so-called "Jewish" Home Party himself, Naftali Bennett.

Anyone else see that history is repeating itself?

I am guessing the Shabbak actually does have a plan. Maybe the goal here was simply to crush them, and to scare anyone else who holds The Almighty and His Torah in higher authority than the deMOCKratic State. Maybe they actually think this was enough to scare the hilltop youth and stop them, at least temporarily. But, from doing what? I have no idea. Goatherding?

Better yet, perhaps they will simply wait, and observe, and monitor the chatter, and then decide upon their next step. The Israeli Government has a pattern of gathering data from its operations, large, and small, as well as orchestrated.

On the other hand, "Bogie,...I am not so sure. All we know about him, is that he thinks that a "Torah State" is not something to work toward, and that those who do choose to work toward such a thing, are dangerous.


Of course, everyone involved on the State's side of this conflict, including "Jewish" Home Party head Bennett, has failed to consider one important factor: emumah (faith). This is what they are ultimately afraid of, and what they see as the ultimate threat to the existence of a secular, "democratic," State, a State which is increasingly unable to call itself even cosmetically Jewish.

"Bogie," the Minister of Defense himself, declared his belief that desiring a Torah State was a disastrous thing, and that those working toward such a goal were dangerous. So, what would he say to a Torah Kingdom instead of a State?
Posted by Esser Agaroth at 8:36 PM

Couldn't agree with you more. At least the boys who weren't tortured used their time well, by straightening their Emunah and learning Torah. The attempt to suppress Torah backfired. Better make note of that, Erev Rav good for nothings!