What Happens when your "Rabbi" Hugs Terrorists? (Updated w/Video!)

Hold onto your hats, and fasten your seat belts. This is going to be the most offensive post I have ever written. 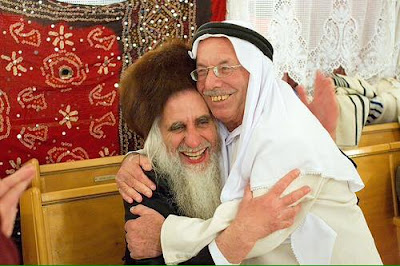 I just found out that Menachem Froman, the late "rabbi" of the town of Teqo'a, was the father-in-law of one of the women attacked this week.

Froman saw the Arabs through a Western, (ie. non-Torah) mindset. Anyone who bothers to read the Tana"kh, and the works of Haza"l will see just how dangerous the Arabs are, and will ever be.

Anyone who bothers to pay attention, will see that Abbas's [not in the least bit] moderate Fata"h Party sees no difference between Teqo'a, Othni'el, Efrat, and Tel-Aviv. All of these are seen as "settlements," to be eradicated of their Jews, and to be re-settled by Arabs.


Who was it who said that if ten thousand bottles of water stood in front of you, and you knew that one was poisoned, just how many of the bottles would you drink before you finally stopped, to prevent yourself from drinking the poisoned one.

How many times would you repeat the same mistakes over again expecting different results? (Albert Einstein's definition of insanity)

Yet, Froman insisted on hugging terrorists from Fata"h and Hamas, and their associates.


Peace is the increasing observance of the Torah by Jews,...the entire Torah,...including the politically-incorrect parts.

Peace is not ignoring The Almighty's warnings and other instructions regarding Yishma'el (Arabs/Muslims), and any other parts of His precious Torah, which some Jews happen to find distasteful.

We must ask the ultimately insensitive and politically-incorrect question. Even though his daughter-in-law was only recently attacked, and recovering, we must seize the opportunity, while the wound has been freshly re-opened, before another Jew is brutally attacked or even murdered:


Was Froman partly responsible for his daughter-in-law's attack? 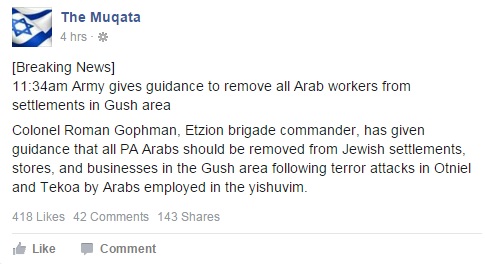 I was almost certain that this was a parody of Israeli news, much like "The Onion." The IDF would never suggest something so racist as disallowing Arabs to enter Jewish towns in Yehudah and Shomron (Judea and Samaria), right?

Un-Enlightened! Un-Democratic! Even Racist! Oy Gevald! And what is now being forced down our throats, the crap that such an act is Un-Zionist!

But, sure enough. They did.

It will be interesting to see just how long such "guidance" will remain in place. Undoubtedly, it will be the Jewish towns, which have become so utterly dependent on Arab labor, to be the biggest whiners over the lack of building and renovations taking place  because of it.

In the words of some of the great residents of Ofra, where I used to live...

Will see how long the town stands with that motto.
Posted by Esser Agaroth at 7:20 AM

I was thinking the same thing when I saw that a pregnant woman, Michal Froman, had been stabbed in Tekoa. Her MOTHER-In-LAW, Rebbetzin Froman, wants these terrorists sent to Gaza. She is the mother-in-law, not the mother, and the young woman, thank G-d, was not killed, she was stabbed several times and is in "moderate condition" according to Arutz 7 a few minutes ago. The widow of the late Rabbi Froman can see in real live time the effects of her husband's ill-gotten efforts, and that Davka HER family is the immediate cause of the Arabs being refused entry in Gush Etzion. Ironic, isn't it.

Thank you, DS, for your comment and your corrections.

I agree that the ban on Arab labor will not last very long.

Now, as to the term "Rebbetzin,..." click and read at your leisure.

Senior army source reveals in wake of Dafna Meir's murder, entry of Arab workers to Jewish towns in Judea-Samaria will be reassessed. Security Services to reassess Arab Workers in Judea-Samaria

"A senior army source revealed on Monday morning that in the wake of the brutal murder of Dafna Meir at Otniel in the southern Har Hevron region of Judea the night before, the security establishment will examine anew the entry of Palestinian Arab workers into Jewish towns."

Also: "On Monday, Arab workers were denied entrance to the Har Hevron region amid continued concerns over the security threat posed by their presence.

Knesset members from the political left and right alike have scoffed at calls not to employ Arabs out of fear that they might use their position to launch an attack, but former MK Dr. Michael Ben-Ari called their bluff in November 2014, when he revealed the Knesset doesn't hire any Arab workers for manual labor out of security concerns."

The brutal murder of Dafna Meir was finally the impetus to take action against the terrorists. But how long it will last is anyone's guess.