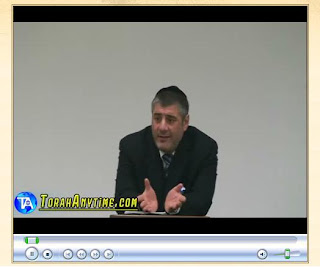 Click on the image to reach the video, or you can download the audio (mp3) file for this lecture by clicking here.

In your lecture “Rabbinical Paralysis” you mentioned (around the 24th/25th minute) a false Moshiach from the recent past. To whom do you refer? As far as I know there has been no false Moshiach since Shabsai Tzvi.

1. I was speaking of the leader of the Lubavitch/Habad movement. There is no doubt whatever that the Lubavitch movement promoted its leader as the Mashiah. This was not the doing of wayward Hasidim; it was instigated, orchestrated and encouraged by their rebbe.

2. Upon assuming leadership of Habad in 1951, the last rebbe spoke openly about his deceased father-in-law, the former rebbe, being the Mashiah (see the first in a series of talks given on the occasion of his father-in-law’s yahrzeit, later published as a book entitled “Bathi L’Ghani Ahothi Kala”). At some point he apparently realized that his father-in-law was not returning from the grave to reappear as Mashiah; he eventually decided that the Mashiah was none other than himself.

3. In the early decades of his leadership, this was an esoteric teaching known only to his inner circle. In the late 1970’s, the Lubavitcher rebbe himself began alluding to the “fact” that the Mashiah was “living among us” and left none of his listeners in any doubt as to his meaning. This inane campaign became increasingly frenzied and irrational. Rather than faltering at the time of his death in 1994, the insanity continues to spread. At Habad headquarters in New York the expectation is that their rebbe will miraculously reappear. Shaharith is delayed each morning for 5 minutes just in case….at which point the gabai announces that “the rebbe” is apparently unable to make it today, and Shaharith begins. I kid you not.

4. This outrageous phenomenon is not as surprising as it may at first seem. Shabtai Ssvi’s followers were known as “Zoharisten,” an allusion to the fact that they, like their leader and demigod, were heavily influenced by the Zohar. Lubavitch Hasidism is rooted in a literalistic reading of the Zohar and Lurianic Qabala, which when uncritically combined with the radical and pernicious notions spawned by the speculative school of Hasidic thought founded by the Magid of Mezritch, could only have led to the present heretical state of affairs.

5. This, I believe, is why the Gr’a z’l (the Vilna Gaon) refused to meet with the original Lubavitcher rebbe even when the latter came to Vilna to convince him to rescind the herem (religious ban) the Gr’a had signed against Lubavitch and similar movements. In his great and profound wisdom the Gr’a saw that these Jews had crossed the point of no return. The Gr’a was able to be “HaRo’e eth haNoladh (One who sees that which is yet to come)” (see Avoth 2:12 or 2:9).

1. I cannot engage in a discussion of the history of Hasidhuth in general at this time – and not because it is not a worthy and legitimate subject. I simply do not have the time.

2. It is an objective and self-evident fact that Lubavitch-Habad is unique: a) of all Hasidic sects, only Lubavitch-Habad proclaimed, during his lifetime, that their rebbe was the Mashiah (all objective evidence to the contrary); b) only L-H could possibly have the gall to continue making this outrageous claim many years after his passing; c) only L-H proclaim “Long live Our Master” etc. 16.5 years after his death, because to them he was not human and cannot be dead (which should remind you of something); d) only L-H would publish their rebbe's claim that davening to their rebbe, dead or alive, is permissible and proper and does not constitute praying to a separate entity because “the [Lubavitcher] rebbe is simply an extension of Hashem”. His words, not mine.

3. Regarding Liqute MoHaRan: just as with any other “ism” within Tora Judaism, you can take it or leave it. It is my view that one should take, and benefit from, some of the teachings therein, because they are extremely insightful and beneficial; and leave, and not be bamboozled by, other teachings which are problematic and pernicious. As for discerning between the two, one needs to find a great Hakham to steer one in the right direction.

4. Regarding why the Nodh‟a BiY‟hudha (R. Yehezqel Segal Landau) ordered the public burning of the book entitled "Toldoth Ya'aqov Yoseph" (the first Hasidic work to be published) – I do not claim to know for certain. It is true that there are some problematic statements in that work. It is also true that many suspected at that time, and not without reason, that the new movement was, or would evolve into, a repeat performance of the Shabthai Ssvi debacle and heresy. This was also clearly in the back of the minds of the Gr‟a and other Hakhamim who placed Hasidhim in herem. In point of fact, this suspicion materialized and manifested itself only in the case of Lubavitch-Habad, a fact that today is plain for all to see.