Sources close to 'Jewish terrorist' say Prison Service trying to conceal his deteriorating mental state before court decides if he is fit to stand trial. In one incident, they say, he injured himself while 'fighting demons' in his cell

"Jewish terrorist" Yaakov (Jack) Teitel, who was charged with murdering two Arabs, sustained light injuries to his hand at the Ayalon Prison when he imagined he was fighting demons and threw a pot at a mirror in his cell, Ynet learned overnight Sunday...

Funny how Jews who are "charged" with an offense, yet to be proven in court, are called "terrorists." Yet, Arabs, calling themselves "Palestinians," a made up identity based on a Roman applied word designed to wipe out the Jewish connection to the Land of Israel, are called "freedom fighters."

Actually, it is not funny at all. It is quite sad, especially when it's Jews doing the name calling.

Yitzhaq Rabin ysh"w was a real murderer, but I guess the killed the right people, Lech"I members, future Prime Minister Menachem Begin's band of Jewish terrorists freedom fighters, to prevent it from being acceptable to call him that. 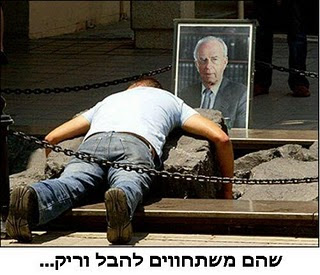 ...In one incident Teitel "fought a demon" he claimed was hiding in his mirror. He threw a pot at the mirror and lightly injured his hand. In another incident Teitel was found unraveling the velvet curtain covering the Ark of the prison's synagogue, claiming demons were hovering around it.

One of Teitel's associates said he should be committed to a mental hospital, "but the Shin Bet is preventing it because in a month's time there is a hearing on his mental state and the prosecution claims he is fit to stand trial. If he is committed the State would essentially be admitting its mistake, so for the time being he is suffering and other inmates are suffering from his behavior." (Read more...)

What is the current mental state of Ya'akov Teitel?

As usual, when Israel's Shabba"k (General Security Service) in involved, we shall never know for sure.

To the best of my knowledge, there has been no assessment of an established baseline. In other words, there does not seem to be any record of Ya'akov Teitel's mental state pre-incarceration.

If you recall, Teitel was in the custody of the Shabba"k for weeks before it was released to the public. The Shabba"k is accountable to no one, with the possible exception of the Prime Minister himself. So, who knows what occurred during the time of Teitel's initial custody, what "methods" of "questioning" were used, and what drugs were administered to "calm" and "subdue" him?

This blogger will not speculate to what or may have occurred, and thus risk "disappearing" for a time. You will have to use your imagination.

And, as I have suggested before, if you don't hear from me for extended periods of time, you should assume the worst.
Posted by Esser Agaroth at 10:40 PM

The leftists would run riot if Arabs were ever denied due process, but when it comes to Jews they have no problem when the gestapo shabak use its dirty tricks. I never assume anything in these matters, in accordance with my belief that they are truly capable of anything. The curious thing about the shabak is their use of star chamber tactics. If the evidence against someone is so concrete, why would you not use the "democratic" system to prove it? This denial of due process for Jews is an abomination. If Teitel is truly guilty of the alleged "crimes", let them show us the evidence. Frankly, I would not be surprised if Teitel were to have an accident in prison. We will never hear anything akin to the truth when it comes to Teitel.

I don't know; I don't ask the family. It's all so sad. nor do I know what really happened.

Thanks for your comments! They are always appreciated from both of you!

Hard to get due process when you're murdered on the spot, or forcibly removed from your home to create illegal settlements. This man is a racist, a homophobe and a terrorist and your 'defense' of him is disgusting. His crimes targeted Jews and Arabs alike

I usually have a policy of not publishing anonymous comments.

But, you bring up good points.

Murdered on the spot? Q: Why, then does the IDF get ordered into Gaza, do a half ass job, then get ordered out? A: The goyim (UN, EU, US) tell us to get out.

The Land is God's. It is not ours to decide to whom to give it, sell it, or rent it. That's what the Torah is for. It's His instructions for how to live life on a daily basis, not just keeping Shabbath, praying or Kashnruth, but how to run a (truly Jewish) gov't and how to fight a war, among other things.

This last week's parashah is right on politically-incorrect point (Num. 50:33-36). It's us or them.
For the record, Teitel could not have done the gay center shooting as he was driving his neighbor's wife to the hospital to give birth. This was confirmed by hospital personnel.

Gee. I wonder why he admitted to doing it anyway???

Hmm...where are the so called human rights activists now??