My comments on the U. N. approval of a Pseudostinian state were apparently insufficient.  So, I will try again.


There is no such thing as a Palestinian.

These Yishma'elim (Arabs) who occupy various portions of Eretz Yisra'el (the Land of Israel), albeit pawns of their big brothers in the surrounding Yishma'eli nations, cannot be Palestinians, because there is no such thing as "Palestine."

Palestine, from "Philistia," was what the Romans insisted on calling all of Israel.  Even though Philistia was actually localized to the area of Azza (Gaza) and surrounds.  The Roman goal was the same as many modern day countries: Diminish the Jews' integral and unbreakable connection to Eretz Yisra'el.  Nablus, for example, is simply a bastardization of the Roman [Flavia] Neopolis. Arabs pronounce it "Nablus," because they have difficulties with the "p" sound.

Nablus was never an ancient Palestinian city, although is was most certainly an ancient city.  It was, and is, called Shchem, a portion of which was actually purchased with money by our ancestor Ya'aqov (Jacob - Gen. 33:18-19).

Thus, I use the term "Pseudostinian," a term which I got from Batya at Shiloh Musings.

Nobody wants these groups of Yishma'eli clans, except suicidal, Leftist Jews, of course.

Why didn't Sadat want all of Rafiah, even when Begin offered it to him?  He did not want "Palestinian" Rafiah, only "Egyptian Rafiah.  He said it was Begin's problem, not his.

King Hussein of Jordan massacred 3,000 of which people, on the day later to be known as "Black Sunday?"  The Pseudostinians.  Gee, I wonder if his son Abdullah's marriage to a Pseudostinian had anything to do with an attempt to keep the masses under control.  Pseudostinians, after all, are the majority of the Jordanian population.

What happened when a Jewish-Arab youth group was formed in Yaffo in 1991?  It didn't succeed, because the Yishma'eli kids kept cheering every time a missile hit Tel Aviv.  So much for the Leftists attempts for their version of "peace.  An, what makes these Yishma'elim any different from those occupying Azza (Gaza), Shchem, Hevron, or Jenin?  Only one thing, the international imposition of artificial boundary lines.

What was the first thing the Kuwaiti government did in the 90's when the U. S. pushed the Iraqis out?  They kicked out the "Palestinians," for siding with Hussein.

What happened when in 2006 Qetusha rockets killed Yishma'elim in Nazareth?  The Yishma'elim themselves cheered.  What about the dead Yishma'elim?  Don't worry!  They're martyrs.  Hizbollah did them a favor!

This is the mentality of this pseudo people.  It is identical to that of their brethren.  They are only a segment of the Yishma'elim.  The fact that they are treated poorly by their own is irrelevant, and NOT our problem.

Please look closely at this map, being held up by Holocaust-denier/Munich Massacre-funder, "President" of the Pseudostinians, Mahmud Abbas (left). 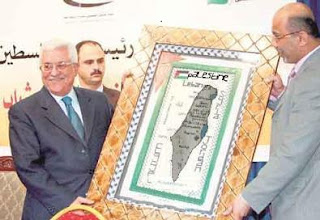 In the Yishma'eli view of the world, there is only the imaginary State of Palestine.

Israel does not exist.  The Pseudostinians have succeed in pulling the wool over most of the world's eyes, including those of quite a few Jews.  They have convinces them that their fabricated legends of a Palestine, are truths.

We do not seem to have any control over what others think of us and of our homeland.  So, when we will stop bothering to try?

When will we stop bending over backwards, often getting ourselves killed in the process, to help a non-existent people achieve their own delusional goals, and start focusing on our own people's well-being?

It had better be soon, because I am not sure just how long how we will be able to continue down this physical and psychological, suicidal path.

Since it is Hanukkah, I will add...

"Not foreign land did we take, and not over property of foreigners did we take control. We have returned to the inheritance of our forefathers, from which we were unjustly banished by our enemies." - Shimon (I Maccabees 15:33)

I know that the rulers were from Saudi Arabia, but exiled through fighting there. So they themselves are recent immigrants. But how are non Palestinian Jordanian Arabs different from those there that call themselves Palestinians?

LondonMale, I don't know, but the Hashamite "royal" family apparently is able to. They are cousins of the Saudi royal family. My understanding is that the British gave them Jordan to appease them. Those non-Palestinians could have been the Hashamite followers. Not sure. But, for an extensive history of the peoples of the area, see Time In Memorial by Peters.

in the vanguard said...

My two cents on this "issue" will not please most Jews, judging from all the busy buzzing that political issues easily generate among them, but in case just one will listen, here's what I got to say about those, and this "issue":
http://hezbos.blogspot.com/2012/11/resuscitating-dying-counter-culture.html

Well, personally, I have been mentioning some of the concepts in your post for years.

The only issues I have with that post are:

1) You say "The Rebbe," don't indicate which one. I find it offensive when Lubavitchers (maybe you are one) marginalize all other rebbes, by putting theirs above everyone else, even the non-messianics. Don't give me that crap the "The Rebbe" was "The Rebbe" of our generation, above all others. That's just hashqafah blinding their view of halakhah. Please read the following on this issue: The Rebbe. If you had mentioned that you were Lubavitch in your post or somewhere on your blog where it's immediately visible, then I wouldn't have had a problem with your language.

2. What is this about America?? (Am Reiqah) OK. I understand your desire to wake up Jews in America. But, the ONLY place where we need to be is in Eretz Yisra'el.

Batya actually got that word from me.
I got tired of Arabist repeating BS
mythology such as Jesus was a Palestinian. They claim Jewish names
indicate that they were recent migrants. Guess what if you look at Palestinian names you see the same pattern.

I also get tired of Communists claiming claiming Jew is a religion
and then ignoring their sacred Soviet Union declared it a nationality on their official records. You get a plethora of rationalizations but Communists obsessed about Zionism well before 1948. Furthermore, religion as well
as ethnic grouping is on every ID paper from the region.

Thanks for letting us know!

And, thanks for the additional information as well!

I do not publish references to false prophecy of false religions.