The U. N Approves A Pseudostinian State


Many people have already asked me what I think of the UN's recognition of "Palestine," and what we should do about it.


"It doesn't have to mean anything.  But, the Israeli government, along with Jews around the world will allow it to mean something."

It is as simple as that.

People around the world have bought into the Palestinian lie.  What is there for us to do about it?  We have given that lie power, by being wishy-washy about it what it really is, a big, fat lie.

It is a lie that the Arabs have any connection to the Land of Israel at all.  One only has to read Tana"kh (The Bible), to know that the Yishma'elim (Arabs) entered Israel only when the Jewish Kingdoms were weak. They murdered, raped, and pillaged, then left when they were done.  Sound familiar?  It should.  Only the swords have long since been replaced by guns, courtesy of the Israeli and U. S. governments, not to mention the sanctioned smuggling.

Arafat once tried calling his group of Yishma'elim descendants of the Jebusites, and thus the rightful owners of Jerusalem.

Many of you won't even remember this silly ploy.  That is how effective it was, not effective at all. So, they simply ditched this lie, hoped that everyone would forget about it, and moved onto the next lie.

These Arabs, albeit pawns of their big brothers in the surrounding Yishma'eli countries, cannot be Palestinians, because there is no Palestine.  Palestine was what the Romans insisted on calling all of Israel.  Even though Philistia was actually localized to the area of Gaza and surrounds.  The Roman goal was the same as many modern day countries: Diminish the Jews' integral connection to the Land of Israel.  Nablus, for example, is simply a bastardization of the Roman Neopolis. (Arabs have difficulties in pronouncing the the "p" sound.)

Nablus was never an ancient Palestinian city.  Although is was most certainly an ancient city.  It was, and is, called Shchem, a portion of which was actually purchased with money by our ancestor Ya'aqov (Jacob - Gen. 33:18-19).

Thus I prefer to call these Yishma'elim, "Pseudostinians," a term I got from Batya at Shiloh Musings. See her take on this UN vote, Standing Ovation For The Displacement/Destruction/Replacement Of Israel.

And, of course, as Tomer Devorah suggests, it was no accident that this vote took place on November 29, which was the same date in 1947 the UN voted to approve its partition plan for the area, making the way for Israeli statehood. 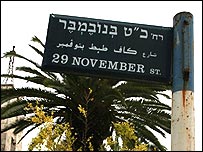 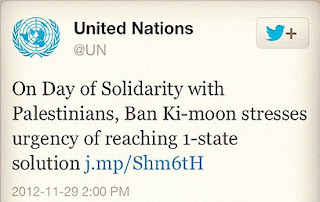 Either this slip shows just exactly how much he hates Israel, or shows the true end result of Israel's success, deep in everyone's unconscious, or both.

In response to the UN vote, Israel approved new construction after UN vote.  Knowing the Israeli government, this was probably just its version of sticking out its tongue at the Arabs, and the rest of the world.  We should not need the approval of the rest of the world to build on Jewish lands.  Actually, we should not need the the approval from the Israeli government to do so, either.

A "Palestinian" Quiz has been making its rounds on the Internet lately.  It is captured here by Ya'akov Kirschen in his Dry Bones comic strip.  It validates the use of the term "Pseudostinian." 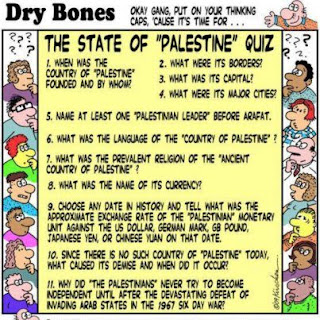 But, why not let an Arab have the last word?  Hey, there's a first time for everything, right?  This isn't just any Arab, but a former commander of the Pseudostinian Liberation Organization [PLO].

Posted by Esser Agaroth at 1:33 AM

B"H - I know, I know, we go by our Sages, not by the Tanach itself. Yet, there is an exceptionally relevant line in there that beautifully clarifies most aspects of this matter and we should definitely learn from it. It goes like this: "They provoked Me with a non-god, angered Me with their vanities,; so shall I provoke them with a non-people, with a vile nation shall I anger them." Dvarim, (Deut.32:21). So, what could we learn from this, if we wanted to? First, most importantly, that it is He, Hashem, who runs the world. Let's never forget this! We don't have enemies "by chance", He gives them to us. Second, specific punishments are given for specific sins. In this particular case, an obviously "non-people", the "palestinians" are given to us for what? For idol worshipping and for our vanities, which is related. We put our hopes and aspirations in the State and its IDF and we attribute our safety, our very lives to them, instead to Hashem. That is our idol worshipping today and that is why we are punished with the "palestinians", with a vile, obviously non-nation. The approval of their state by the UN last week is an indication that Hashem may consider our behavior-pattern worsening, rather than getting any better. There is a reason that this country, Israel, never knew a day of peace in the 65 years of its history. The reason is of course us. We are not doing what we supposed to be doing here. Instead of relying more and more on the strength of the IDF and support the Hellenistic democracy of the State, which, by the way, is the goyshe way, for our security we should turn the State Jewish and the IDF Jewish. Last week's UNGA vote is a warning that we are not doing this and should we fail, we'll be thrown out from His Land. Indeed, this Land is ours conditionally, from a divine prospective, what's the point in keeping us on it? Kiddush Hashem of course. If we kiddush Obama and pouring cement on the Land as opposed to Torah, clearly well continue to merit our increasing problems. Again, Netanyahu's reaction, the 3000 building permits is counter-productive. He should be given one building permit, that of the Temple on the Temple Mount in Jerusalem as we are put here not to serve ourselves, but Hashem. This is the big mistake Zionism, secular or religious makes: It replaces the love of Hashem with the love of the Jew. They can get away with it because the love of the Jewish people also is a mitzvah, a requirement, a good deed and they claim that they are doing this. But they don't. Their love of the created comes in conjunction or without the love of Hashem and so we'll have the kind of problems we face today, like the "palestinian" problem. The solution that every Jew has in his hand, of course is simple. We simply have to show Hashem that we worship Him, not the replacement created entities. In practice it means refraining from joining the IDF and refraining from voting for knesset, both non-Torah, secularist anti-Torah institutions. If we refrain from doing the voluntary actions in support of the golden calf, we send a positive signal to Hashem: We tell Him we are with you. If we don't, well, let me not elaborate on this here. Let me just mention that we know pretty well what it's like when He hides His face from us. With last week's UN vote we were warned: We are entering to a similar situation. It's '39 again. So let's prevent it and stop provoking Him before it's too late, individually and as a nation. Let's do this now, while we still can, before it gets a lot, lot worst.