Dear JTA: No, I Will Not be Donating to you this year, nor any year...

Did any of you receive the following e-mail request, like I did?

How are European Jews coping with the wave of hatred and violence against them sparked by the Gaza war? Is Hungary trying to whitewash its role in the Holocaust? Do Kiev’s Jews need self-defense groups? Will a right-wing surge in Europe undermine tolerance?

Jewish news doesn’t stop in the United States and Israel. JTA’s dedicated correspondents are tracking developments in dozens of countries.

It’s a massive job covering the global Jewish community – never-ending, sometimes dangerous and always costly. Can you please help us?

A contribution of $50 or $100 will support our global team of correspondents. They dig for facts, expose myths, reveal hidden truths and bring the full story to you and to the world.

I hope we can count on your support.
Thank you. 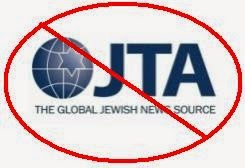 No, I cannot help you, not this year, and probably not any year.

How are European Jews coping with the wave of hatred and violence against them sparked by the Gaza war?

Is Hungary trying to whitewash its role in the Holocaust?

What about how the Labor Zionists have tried to whitewash their tole in the Holocaust?

No, they do not. They just need to get out of there, and any assistance to do so.

Will a right-wing surge in Europe undermine tolerance?

But, would a story or report with any of the themes I propose above ever make it into the JTA?

How is it that right-wing surge was mentioned, but there wasn't any mention of Muslims? Don't want to hurt anyone's feelings? Or just a little employing a little "creativity" to your letter.

And, you ask that I donate money to the JTA? For what? So that I can be a collaborator in keeping the Jewish People locked in their prison of co-dependent exile?

No thank you.
Posted by Esser Agaroth at 8:53 PM