Wikipedia: New Israeli Sheqqel
The 20 sheqqel banknote is the first, as of April 2008, to be made of polypropylene, a polymer substrate, which is superior to the current paper note with a circulation life of a few months only. The polymer note is printed by Orell Füssli Security Printing of Zürich, Switzerland. 1.8 million of the new banknotes were printed with the writing "60 years [anniversary] of the State of Israel" (in Hebrew), in red ink.

Esser Agaroth (2¢):
When these fancy-shmancy polypropylene 20 sheqqel notes first came out, "they" were raving about how amazing they were, and that you simply could not rip nor cut them. Well, perhaps these polymer notes have a better circulation life than paper, but they are certainly not invincible.

The pattern of this tear may even suggest some sort of flaw, which has now been exposed.

Irregardless, it is still difficult for me to fathom that plastic has a "value" of 20 sheqqels, or even one sheqqel. Gold-backed, paper certificates were one thing. The gold backing was taken away, and the wool was pulled over our eyes. Now, here in Israel we are not only carrying around plastic, credit cards, but plastic currency as well.

It is no secret that Israel, and many other countries, have been forcing the move toward a completely, plastic, or electronic, economy, for our "safety and convenience," of course.. It is now almost impossible in Israel, to have ones salary paid by check which can be cashed or deposited into a third party's account, let alone receive cash, period!

It would be a welcome awakening and relief, if we were finally to realize that the value of paper or polymer currency is only an illusion, created by the banksters and their governmental pawns, and continually enabled by us, the masses over whom they want to maintain control.

Believe you me. There may very well come a time when a bag of rice will be worth more than a piece of plastic, a piece of paper, or even a piece of metal.

Speaking of "value," the new 50 sheqqel note is worth even than the 20 sheqqel note. Its value is equal to one big fat embarrassment plus a symbol for the annihilation of the Jewish People. 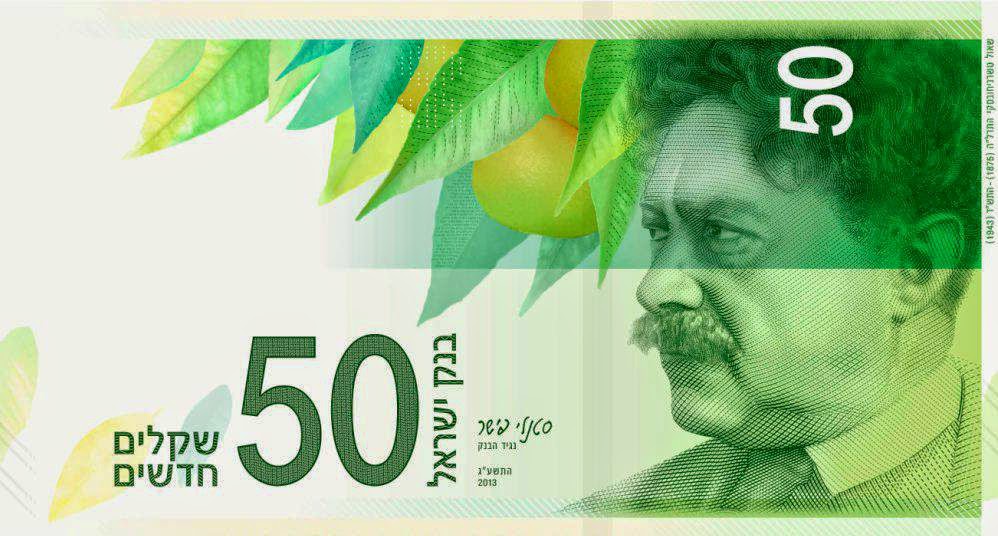 Arutz 7: 'The Symbol of Assimilation, Now the Symbol of Israel'
Netanyahu's brother-in-law Dr. Ben-Artzi calls on Israelis not to use new Tchernichovsky 50 shekel note; asks 'where is Jewish Home?'

A new 50 shekel banknote bearing the likeness of Russian-born Hebrew poet Shaul Tchernichovsky (1875-1943) entered circulation on Tuesday, but Dr. Hagai Ben-Artzi of Bar Ilan University refuses to use the new note and calls on others to follow suit.

Ben-Artzi, who is the brother-in-law of Prime Minister Binyamin Netanyahu and lectures on the Torah and Jewish Thought, told Arutz Sheva that the new banknote is a disgrace to the state of Israel.

The noted lecturer reminded that Tchernichovsky was married to a Christian woman his entire life, and refused the insistent pleading of former Chief Ashkenazic Rabbi Shlomo Goren to have her convert to Judaism as befitting the wife of a key Hebrew poet in modern Israel.

The new note sends exactly the wrong message at a time when "in Europe there's an 80% rate of assimilation and in the United States 60% assimilation," argued Ben-Artzi. "The Jewish people are becoming annihilated due to assimilation; how can the state of Israel be capable of turning precisely Tchernichovsky into a symbol?"

Ben-Artzi also criticized the Jewish Home party for not speaking out against the committee recommendation to use Tchernichovsky in the new bank note; the criticism comes at a time of talk in the party of splitting due to fears of a changing focus away from religious Zionism.

"Where is the Jewish Home?" asked Ben-Artzi. "Where are the hareidi parties? Where is the Likud party that declares itself to be Jewish and nationalist?"

Calling for a boycott on the new banknote, Netanyahu's brother-in-law stated "each any every one of us is obligated to explain the problem with the note. We must not accept this miserable decision to push this man into every home in Israel."

"Is the state of Israel deriding us? We will turn the decision into a public discussion. In every street corner they will talk about the problem. If a million citizens will not use the note, the state will have no choice but to remove it from financial circulation," concluded Ben-Artzi.

The New Israeli Sheqqel made be holding against the dollar and the euro, but it is truly broken.

Update:
A reader pointed out that...

American bills say "In God We Trust". The new Israeli ₪50 bill, the one featuring Tchernichovsky says "In Man We Trust," roughly translated. Don't believe it? Take a look for yourself. It's on the reverse side, right under the serial number. - Hillel Levin, Shiloh (red arrow) 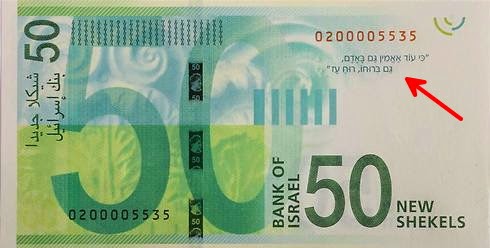 Sure enough, on the reverse side of the new 50 sheqqel bill, there is a quote from one of Tchernichovsky's poems, אני מאמין (I Believe).


כִּי עוֹד אַאֲמִין גַּם בָּאָדָם, גַּם בְּרוּחוֹ, רוּחַ עָז
For I shall yet have faith in mankind, In its spirit great and bold

You can read the entire poem in Hebrew on Wikipedia, or in English translation on Ha'Aretz.

Would you believe that it has been suggested, and apparently a lot, that this poem replace HaTiqwa (The Hope) as the Israeli National Anthem? Not surprisingly former K'nesseth Speaker Avraham Burg (Labor), and an Arab MK are included with those in those in favor of this proposal.
Posted by Esser Agaroth at 4:11 PM