Arabs Attempting Forgeries: Do Your Homework!

I have grayed out the photo, and even the fingers holding the ID card up. Knowing my luck, I would get sued, if I don't. 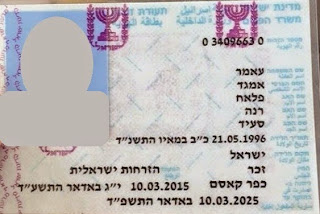 Esser Agaroth (2¢):
Where do I begin with the problems with this attempted forgery?

His own name Amjad should have chipchik/geresh (') after the gimmel (ג) for the "j" sound.

There are countless misspellings, due to too many alefs (א), such as in the month of Adar.

The month of May is also spelled "Mayo" or "Mayov."

"Ezrahut Yisra'elit" (Israeli Citizenship) is spelled with a heh (ה) instead of an alef (א).

Can you find any additional errors here?

I mean, seriously, Arabs should do their homework.

And, before anyone criticizes me for "helping" the Arabs to get it right next time, I will simply say that I wouldn't worry about that. Even though I do get one or two readers from Riyyad, Saudi Arabia and from Qatar, per month.
Posted by Esser Agaroth at 11:17 AM

I don't suppose they could be troubled to study the numerology system. Here's another error: the date 21 (in 21.5.1996) is mistranslated as khaf-bet; even if it were the same date in the Hebrew calendar, it's off by a day. It might be off by much more.

Thanks for the laughs!