Israel and the Arabs: The Same Old Recycled Solutions

YNET: Political initiatives and online outreach: We can stop incitement for terror
Op-ed: This intifada has already reached a point in which military and intelligence initiatives can no longer provide an adequate solution. Israel needs to increase monitoring of social media and arrest main agitators, but also promote a political initiative that includes unilateral moves that could lower the tensions.

Esser Agaroth (2¢):
Ron Ben-Yishai's first error is to assume that all military options have been tried. They have not. The State of Israel has been locked in a bitter cycle, for I don't know how long. In a nutshell, it has been doing a half-hearted job to 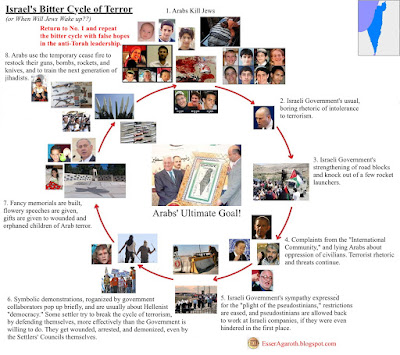 Even in the Six-Day War, the State of Israel stopped short. Until this day, it has not annexed Yehudah and Shomron (Judea and Samaria), for fear of having figure out what to do with the Arabs, for fear of "what the goyim will say," for any number of fears.

Ben-Yishai then suggests that "Israel needs to increase monitoring of social media and arrest main agitators."

Yeah, sure. Why not? Of course, when these suggestions are initiated by the left, pseudo-right, and really by anyone in the government, the ultimate goal to apply these strategies and laws to Jews, not Arabs, in order to maintain control over the populace. Just be aware of that.

And, what does Ben-Yishai mean by "unilateral moves?"


Primarily, giving the Palestinian Authority complete control of the East Jerusalem Arab neighborhoods. This does not mean that the IDF and Shin Bet will not be able to enter Abu Dis or Qalandiya when the need arises - based on intelligence. But the residents in these neighborhoods should not have Israeli IDs, which allow them to drive terrorists to attacks inside Israel. Another solution is transferring Area C to the Palestinian Authority, granting building permits to Palestinians and even encouraging projects that could create jobs.

Israel can also hint to the Palestinians that if things calm down, it will consider freezing settlement construction outside the large settlement blocs and releasing prisoners. Each of these political measures, and other similar ones, could and should bring about a change in the current climate, and signal to the Palestinians that their situation could change. This may affect even the hotheaded youths and mostly give parents a good reason to restrain their offspring.

In other words, give them more stuff, give into their demands, because if only we just give them enough, then they will finally come around.

Now, how long have we been employing this very strategy? How many more Jewish lives must be lost before we finally realize that this approach has produced nothing but bitter failure?

Ben-Yishai needs to look as the maps (below) of mythical "Palestine," which has never existed. The Arabs and they certainly do not cities such Hevron, Efrat, and Beth-El as any different from cities like Tel-Aviv, Haifa, and Be'er Sheva.

Remember, in 1947, while Jews were perfectly happy to settle for the UN Partition Plan chop job, the Arabs rejected it, in favor of annihilation of the Jewish People, and the conquering of all of Eretz Yisra'el (Land of Israel). What on earth makes Ben-Yishai, and others like minded Jews, believe that the Arabs have changed, or for that matter, will ever change?

Like the all of the secular, Ashkenazy, "cultural elite," including those non-Ashkenazim who have  השתכנזו (Ashkenized), they insist on hammering an Arab, square peg into a Western, round hole.


"We intend to show that Israel needs a security process as well as a peace process.... To continue with the old diplomatic approach would be like hammering square pegs into round holes." (Time. February 19, 2001)

The truth is that the Western assimilated, un-Jewish Left sees "progressive," Western culture as the superior culture, a global community without borders. Nationalism is the enemy, not armed Arabs.

Well, Ron, that's just too bad. Because the Arabs are right about one thing... 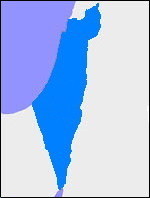 
Check out this video, to see one of the reasons why...

Posted by Esser Agaroth at 8:33 PM

I don't always agree with Rav Bar Hayim, but in this video, he is 100% correct. Very well said.

I think this video is a good example of how the Torah approach and the Western cultural approach can very much be at odds.

The Yishma'elim are just not likely to "change," individual exceptions notwithstanding.

Esser, may I please use your Bitter Cycle of Terror picture on my upcoming blog post, which I would like to post tomorrow? It's called "Is Israel Appeasing Hitler's Heirs?" and I think this will be an excellent visual aid.

Many thanks in advance for your reply.

Just please include where you got it, and a link to this site.